So much for the starving student stereotype: Apparently 1 in 5 financial aid recipients put the proceeds into cryptocurrencies like Bitcoin, according to the Student Loan Report. 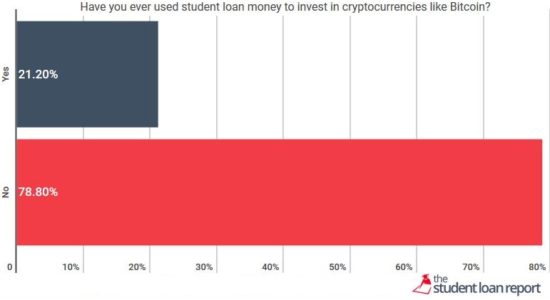 This is based on a survey of 1,000 students that did not include any questions about the amount they invested — many could be buying small amounts. It’s also important to note that the survey didn’t appear to ask about the students’ motivation for buying cryptocurrencies. The students could actually have been using the digital currencies to pay for used textbooks on the Dark Web (thereby skipping the sales tax).

Apparently student loan debtors borrow more money than they end up needing for any given semester, and lenders’ policies specifically allow for additional proceeds to go toward living expenses.

After the borrowers’ loan proceeds pay tuition, the schools’ financial aid offices send the remainder of the funds to students for their use on said living expenses.

No formal system can conduct surveillance on whether the borrowers are using the rest of the money on college-specific expenditures or other things. And even if there were something like that in place, you’d be able to evade it as soon as you put the financial aid proceeds in cryptocurrencies, since they’re largely anonymous and mostly untrackable.

That said, it seems like one of the most likely motives for putting financial aid funds into cryptocurrencies may be an attempt to earn investment profits that would go toward repayment of the debt.

Unfortunately, while this strategy might have been highly successful in previous semesters — when the currencies’ values were trending up — more recently it could have generated capital losses.

The value of cryptocurrencies have generally been coming down from massive peaks since the tail end of 2017. However, this wouldn’t necessarily make them a bad investment, and not just because you could capture an opportunity at a low price. Rather, any capital losses incurred on them could written off on a tax return instead of used to repay student debt balances.

Actually, reporting capital losses on cryptocurrency transactions that originated with student loan proceeds might  prove to be a very welcome strategy for 2018 due to the erosion of the deductibility of interest on student loans under the Tax Cuts and Jobs Act.

Although the combination of student financial aid proceeds and cryptocurrencies may sound surprising at first, perhaps only the prevalence of this practice should come as that surprise: Young people tend to be the earliest adopters of new technologies; then you have student loans reaching such epic proportions that — well, who can blame the indebted from getting extra creative.

Readers, what do you think about all this? Are you surprised to learn about students putting their financial aid proceeds in cryptocurrencies? How should lenders react to this trend, if at all?

If you’re interested in learning more about student loans, Bitcoin, taxes — or all three topics — please check out our abundant archives.