Don’t believe any refrains about the U.S. supposedly having the highest taxes of any country — no matter whether President Donald Trump is saying it nor anyone else, it’s not really true.

How different nations stack up actually depends on which tax research firm is doing the ranking and whether the assessment includes both corporate and individual tax brackets. 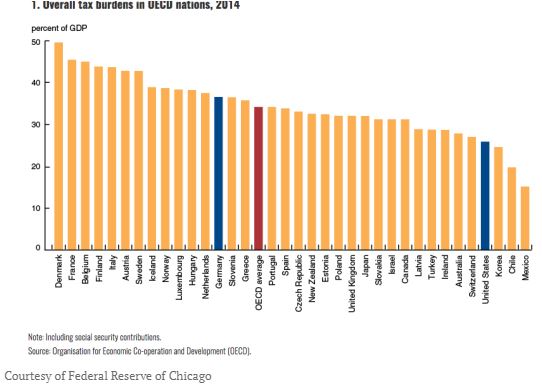 The U.S. doesn’t even have the most complicated tax system, at least not according to a ranking by the TMF Group.

That said, if you look at tax rates before decductions, then, yes, businesses in the U.S. have the highest initial tax rate, of 35%. But what company doesn’t itemize deductions?

Factor in those deductions and the U.S. ranks fourth among Group of 20 countries, according to a report from the Congressional Budget Office.

Where the U.S. ranks for personal income tax varies by types of households and their respective wage brackets: for single people with no children and average wages, the U.S. rate of 26% ranks 16th out of the 35 nations in the Organization for Economic Cooperation and Development.

The ranking drops to 25 for filings by couples with two children.

As for taxing the wealthiest income brackets, the U.S. ranks 18 among OECD nations.

Another ranking actually puts the U.S. at 31 out of OECD nations: The Tax Policy Center of the Brooking Institute found that total U.S. tax revenue equals 26% of the country’s gross domestic product. The think tank stated this was “well below the 34% average for developed countries.”

This figure includes both taxes paid by businesses and individual income taxes, and reflects federal and state taxation rates.

While it would certianly be interesting to see the ranking broken out into individual states, that would become unweildy — and it would be lopsided without factoring in the tax rates of the states and provinces within countries outside the U.S.

Meanwhile, the only OECD countries ranking below the U.S. in the Tax Policy Center measurement are South Korea, Chile, and Mexico.

Readers, does knowing how the U.S. ranks among other countries for taxation make you feel better about the amount of taxes you owe?