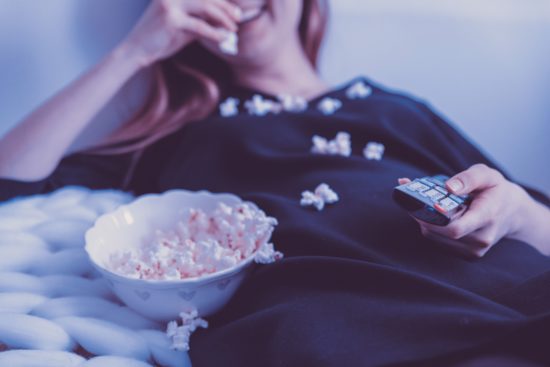 Season six of Orange is the New Black was released on Netflix this weekend. This is sending thousands of people into a weekend of sitting around, binge-watching TV. Although everyone is in need of a restful weekend from time-to-time, there may be some serious health risks to the amount of time we spend sitting – or laying – in front of the television.

Urban Dictionary defines binge-watching as watching an entire TV series in a week or a short period of time. The term rose in popularity around the time Netflix began releasing entire seasons of its television programs at once. Anticipating the return of the show, people began to plan to sit at home, eat, and watch TV.

According to Nielsen, the first episode of the second season of Stranger Things averaged 15.8 million viewers in the U.S. within the first three days. All nine episodes averaged 4 million views, with 361,000 people watching all nine on the first day.

Prior to services like Netflix and Amazon, you waited a week or more in between episodes of a TV show and, usually, you were only sitting there for an hour, at most. With entire television series uploaded to streaming services, you can watch 10 years worth of television in two weeks if you wanted to.

The Impact of Binge-Watching TV

One study found that behavior may actually be bad for your health. Researchers took a look at more than 400 people between the ages of 18 and 25. Each of the participants completed a survey about their TV-watching habits, sleep, fatigue, insomnia, and how long it took them to get to sleep.

Of those who participated in the survey, 80% identified themselves as a binge-watcher. Twenty percent of those individuals binge-watched TV a few times a week over the previous month. More than half said they watched between three and four episodes per viewing, an average of 3 hours and 8 minutes per binge session.

Overall, those who binge-watched TV were 98% more likely to develop insomnia, fatigue, and poor sleep quality, than those who didn’t report binge-watching television.  This is because, according to study co-author Professor Jan Van den Bulck, “Binge-able shows often have a complex narrative structure that makes viewers become completely immersed into the story. This intense engagement with television content could require a longer period to ‘cool down’ before going to sleep, thus affecting sleep overall.”

Researchers believe the brightness of the television is what is impacting people’s ability to get quality sleep. Bright screens, like those found on TVs, phones, and tablets, can trick your brain into thinking it is daytime, making it more difficult to fall asleep and stay asleep.

Robert Oexman, director of the Sleep to Live Institute, described, “What happens when you watch television shows, is you watch bright devices like computer screens, TV screens, and that bright light reduces our ability to secrete melatonin.” Because most people are binge-watching in the evening, it can impact their ability to fall asleep and get a decent amount of rest.

The Cost of Binge-Watching TV


Obviously, there are some significant health costs to binge-watching TV on a daily basis. It can lead to a lack of desire for human connection. It can also lead into insomnia. As you may already know, insomnia can lead to decreased awareness, irritability, weight gain, migraines, among other health issues.

It is also costing the American workforce nearly $63.2 billion per year in lost productivity. Every time someone shows up to work low on rest or misses work because they haven’t slept, it impacts their job and, ultimately, their finances.

If you’re already living paycheck-to-paycheck, you can’t afford to put your job in jeopardy by not getting proper sleep. So, how do you combat the adverse effects of binge-watching TV?

What You Can Do

The more direct answer would be to cut down on your TV consumption. Consider having a set amount of time you watch television each day. Outside of that time, try reading a book or performing another activity you enjoy.

You can also change the time you are binge-watching your shows. Instead of watching three hours of Orange is the New Black on Tuesday night before bed, watch it Saturday afternoon or during your time off. Another good alternative is finding time during the day to watch television if you can.

If you find yourself tied up in a show for a little while, plan to do something fun with friends afterward. Going out and interacting with others, and getting away from the TV screen, can help in counteracting any adverse effects of binge-watching TV.

All in all, combating the negative impact of binge-watching TV is as simple as turning the television off from time to time and getting good rest. Don’t let your relationships or your finances suffer just because Netflix made a good show.

Readers, have you suffered from any of the adverse effects of binge-watching TV?