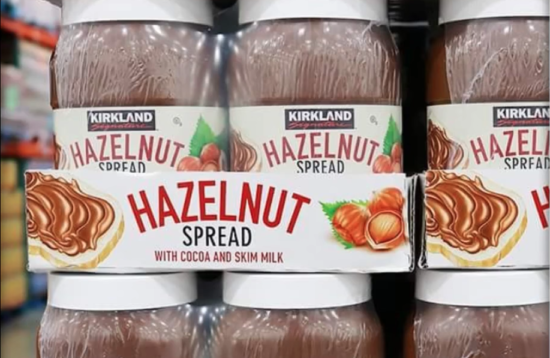 Retail warehouse giant Costco launched its own hazelnut spread in late February — and it has all of the taste of the leading brand-name product with a price per ounce that’s a little over half what the original costs. For just $7.99, you get two 35.2 ounce jars of Costco Nutella, marketed as Kirkland Hazelnut Spread.

Note that if you order from Costco online, you’ll pay $9.99 per two-pack, but that’s still cheaper than the brand name Nutella.

And Costco Nutella also tastes better than other off-brand hazelnut spreads (like the ones sold by Aldi, Walmart and Trader Joe’s), especially when it comes to texture.

Costco Nutella Compared to Others

But our informal taste tests might not jibe with everyone else’s personal tastes. In fact, Nutella is known to have very loyal fans.

Here’s something the loyalists may point out: Although Costco Nutella is cheaper by the ounce, you have to buy a lot more of the product than you do when you spring for the name brand.

People who have limited space to store bulk-size items  — or even those who want to pace themselves on how much Nutella they consume — might want to think twice about whether to buy the product in a Costco size.

The largest size in the brand-name product, Nutella, gives you 33.5 ounces for an average price of $6.99.  Amazon is significantly more expensive with a two-pack going for $24.56 (only you get a total of 67 ounces of it instead of the 70.4 ounces you get in Costco’s two-pack). Meanwhile, Walmart sells Nutella for $5.98 per 13-ounce jar.

Where Can You Buy Costco Nutella?

With prices so low, Kirkland Hazelnut Spread just might popular quickly. But before you get too excited, know that the product isn’t available everywhere yet. Check whether your local Costco carries the product by calling — or looking on the website.

If it hasn’t reached your location yet, don’t worry. Eventually, Kirkland brand items are rolled out to all Costco locations.

So, readers, have you had a chance to try Costco Nutella yet, and if so, what’s your verdict? Got an opinion on how other off-brand products compare to the original Nutella.

If you liked this article, you might want to check out our extensive archive on the topic, which includes these articles: