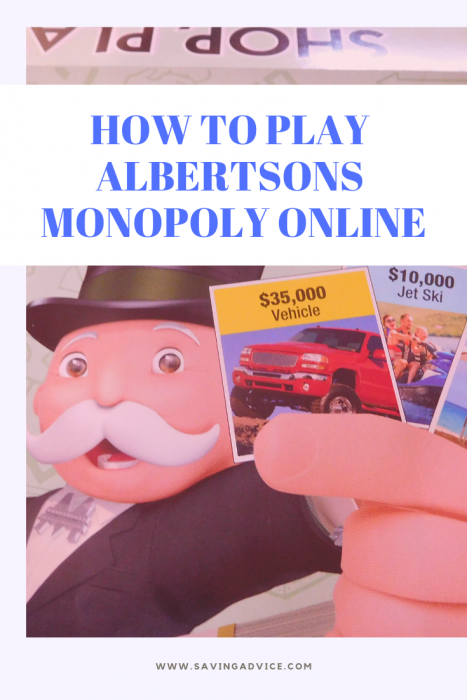 If you’ve visited an Albertsons or Safeway in the past month, you know they’ve kickstarted their Monopoly sweepstakes game for the year. After the game was released on February 9, it has already gotten the attention of millions with its $1 million grand prizes. Additionally, you no longer have to collect physical game pieces. Now, you can play Albertsons Monopoly online!

That’s right! The contest, which has been highly-anticipated each of its nine years, can appeal to even the most tech-savvy amongst us.

How to Play Albertsons Monopoly Online

All you have to do is go shopping at an Albertsons-owned store for your groceries (groceries that you’ll buy anyway). Then, you collect the game pieces and you can play online.

To play online, you simply fill out a submission form. You enter information like your name, email address, address, phone number, etc. When you get a Monopoly game piece, you enter the online code into your “play monopoly” account and begin collecting your game pieces.

You have to get matching game pieces to win or two of the “rare” game pieces. Prizes include two $1 million prizes, four million-dollar vacation homes, and the total pool of smaller prizes are worth more than $200 million. Of course, eight years ago (when it first started), Albertsons had far fewer stores and far fewer Monopoly game pieces being distributed.

No one pays to play Albertsons Monopoly which is an added bonus. From now until May 7, you will have the option of collecting the pieces when you go shopping. Practically 2,300 stores across the United States will be offering game pieces to its customers. In addition to the larger names, a number of small local stores are offering games pieces for shopping as well.

You can also enter through the United States Postal Service by sending a self-addressed envelope to the Albertsons Monopoly at MONOPOLY MON-09 Collect and Win Game Ticket Request, Attn: Promotions Coordinator, P.O. Box 965068, Marietta, GA 30066. These should be handwritten addresses on the envelope and they can also be postmarked no earlier than February 9 and they must also be received before the contest is over (May 7).

However, most people will be playing online and entering to win some really great prizes, including the $1 million grand prizes.

Some previous winners have traded Monopoly pieces in order to win big. Be sure to check out the Albertsons Monopoly game piece thread in the Saving Advice forums!