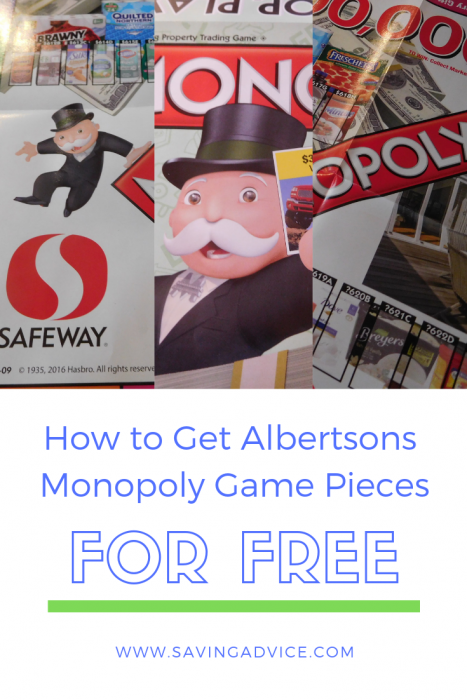 To win, you will need a large number of tickets. Thankfully, there are more than 2,000 locations giving out Monopoly pieces. In addition to the larger names (Albertsons and Safeway), other Albertsons-owned retailers are participating as well.

Even though the price of stamps has increased, envelopes and postage are still cheaper than a cart full of groceries. This is the most straightforward way to get free Albertsons Monopoly tickets.

The official rules for Safeway and Albertsons Monopoly still state that you can include a SASE in an old-fashioned postal letter to MONOPOLY MON-11 Collect and Win Game Ticket Request, Attn: Promotions Coordinator, P.O. Box 965068, Marietta, GA 30066.

The mail-in requests must be received no later than May 9, the last date tickets will be distributed for the promotion. It must be mailed in individually and legibly addressed. Any submissions made in business reply envelopes will not be considered. Other restrictions do apply, so you’ll want to read the complete rules in order not to miss anything.

Once you send in your request, you will receive one game ticket and one bonus game ticket, for a total of two tickets. It’s also important to note that the online prizes are different than the Collect and Win portion of the game.

If you’re not having any luck with trading, consider searching for the specific grocery brands included in the promotional deal. You could even post an ad and explain that you want to pool Monopoly game pieces with people who’ve shopped at all the different grocery brands that participate in the promotion. Sometimes, you may even find someone willing to give their tickets away entirely.

Any of your friends who shop at any of the participating grocery stores may be able to help you win too. If you pool your tickets, you may be able to improve your odds of winning. The wider the circle of friends you reach out to, the greater your chances of obtaining multiples of the same ticket.

The more people you’re able to get involved, the better your chances are. This, in addition, to the other two strategies mentioned above, your chances begin to add up.

Given the odds of winning Safeway and Albertsons Monopoly, any way you can obtain game pieces will put you ahead. So if you’re willing to do the extra work, you can play smarter without ruining your budget.

Readers, are you playing the Albertsons Monopoly game this year?