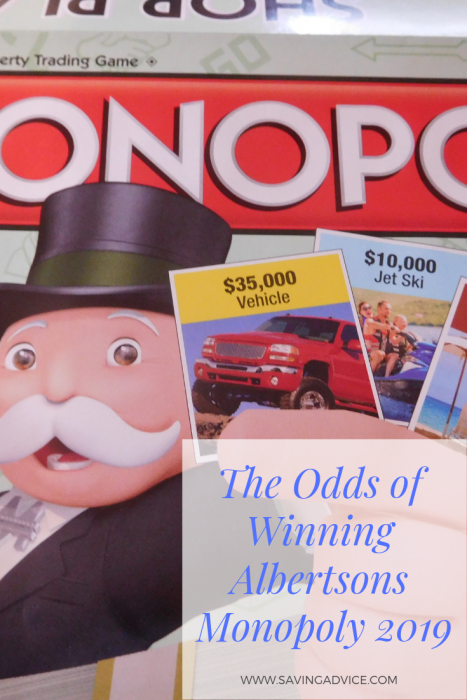 Albertsons Monopoly is back for its 11th year. The contest, which involves collecting Monopoly game pieces from various Albertsons-owned stores, has been something that has created a bit of a stir in recent years. You collect game pieces and, if you are lucky, you will get the right pieces and win the grand prize of $1 million.

Until May 7, you will have the option to gain Monopoly game pieces when you shop at an Albertsons-owned store. The overall goal of the game is to match a set of properties on a Monopoly game board to win a specific prize. Prizes range from free groceries or merchandise to $1 million.

Practically 2,300 stores across the United States will be offering game pieces to its customers. This year is the first year Safeway shoppers will be eligible to play. ACME, United Supermarkets, Star Market, Safeway, Tom Thumb, Randalls, Pavilions, Vons, Jewel-Osco, Shaw’s, and several smaller, local stores are all offering the Monopoly game pieces and a chance to win $1 million to its customers.

Now that you’ve read a bit about the contest, you may be thinking about trying your hand at winning. What are the odds of winning Albertsons Monopoly and taking home one of the $1 million grand prizes?

To win the grand prize of $1 million you need to find two of the hardest to find game pieces. Chances of finding one of these rare game pieces are now 1 in 404 million. So, that means (on the first try) your odds of getting both of the pieces necessary to win $1 million are more than two trillion to one, which aren’t greats odds.

However, it isn’t impossible to win. Additionally, like last year, Albertsons is offering six prizes valued at $1 million. Of course, there are the three $1 million cash prizes but the grocer is also offering three $1 million vacation home prizes as well. If these prizes go unclaimed, Albertsons then performs a second chance drawing for a shopper to get their $1 million.

As stated above, you’ll need to collect rare game pieces to win the grand prize. It isn’t very likely you’ll find one yourself. You are more likely to encounter “rare” games pieces through online trading. Some people trade game pieces to give themselves a better chance of winning one of the prizes (even if it is not the grand prize). It isn’t usually very hard to find someone willing to get rid of a “semi-rare” pieces that may complete a winning set for someone else.

That is only to win the $1 million cash prize or vacation home though. If you are okay claiming a smaller cash price, there are plenty of other rewards to be had. However, there are fewer of these opportunities this year. There will only be 67 million tickets available for free grocery products with values between $0.59 and $14.99 (compared to 112 million tickets last year).

In all reality, if you win anything from the Albertsons Monopoly game, it will likely be one of their smaller prizes, like gift cards, free grocery items, and other small cash prizes. You don’t pay to play though, so you’ve really got nothing to lose. Aside from buying your regular groceries, Albertsons Monopoly costs absolutely nothing for those who play. From now until May 7, when you purchase your groceries at an Albertsons grocer, you will get game pieces.

If you’re looking for a place to safely trade Albertsons Monopoly game pieces, head on over to the Saving Advice forums.