Wouldn’t it be wonderful if gains in the stock market could actually reduce U.S. government indebtedness? If that were true, money might as well grow on trees. But there is a relationship between federal debt and the stock market.


About That Federal Debt

The U.S. government’s indebtedness impacts the bond market along with the value of the dollar (as it trades in foreign exchange markets) along with commodities, while having an indirect impact on stocks.

Generally speaking, when investors perceive the government’s indebtedness to be too high, that can reduce demand for government bonds and with that their prices can decline.

The same logic causes the value of the dollar to decline in foreign exchange markets. That, in turn, can make alternatives to the dollar, like gold, look more appealing, and demand might drive up prices.

The relationship between federal indebtedness and the stock market gets a little more complicated because it’s a bit indirect.

To go back to the example about the dollar, if it declines because foreign exchange investors consider U.S. federal government debt to be excessive, then everything denominated in dollars would lose value.

To recapture that lost value, prices go up — yes, this includes inflation, and even stock prices going up is a type of inflation. And that also sends up the prices of just about all the other types of commodities besides gold.

Sure, you can think of stock price appreciation as the silver lining on the cloud of inflation, but that won’t make increases in other types of prices feel any better if your income isn’t going up.

Speaking of going up up, if you’ve held onto any stocks from the date of the election until now, congratulations on those double-digit percentage gains — unless you held onto retail stocks or any other laggards, perhaps so you could capture capital losses come tax time.

Hopefully you can agree that it’s completely nonpartisan to point out that the stock market’s growth since the election is definitely above average, if not reminiscent of, say, 1999. However, it’s unrealistic to ascribe a single unified cause to the upward trend of the entire U.S. stock market.

Indeed, the market has generally been rising ever since the credit crunch of 2007 to 2009 (the actual bottom occured at different times on the New York Stock Exchange, Nasdaq and in over-the-counter trading, so it’s simpler to cite a general range). 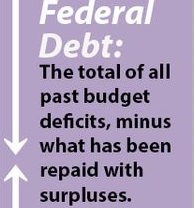 Some might make the case that the ascent was actually helped by government borrowing: $9.2 trillion of the $20.4 trillion federal debt was incurred during Barack Obama’s two terms of office.

To be fair, many investment analysts attributed policy-setting by the U.S. Federal Reserve for rise of the stock market from the credit crisis until around the time of the first interest rate increase in early fall of 2015.

The market took a bit of a breather and then resumed the upward movement, but for myriad reasons rather than any single cause.

It’s not unlike the factors that influence your income aren’t just your own performance but how your industry is faring and many other drivers.

Readers, how have your finances fared since November — and are you able to attribute the causes?