"He who tampers with the currency robs labor of its bread."" - Daniel Webster 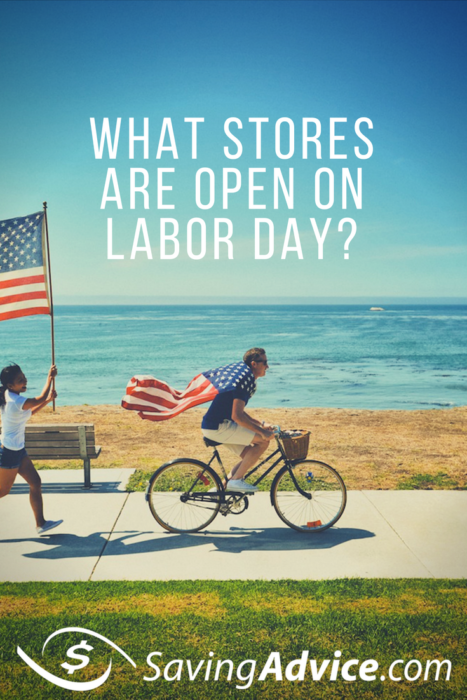 Labor Day weekend is the last major weekend in summer and marks the start of the fall football season.  If you’re planning on hosting a get-together or just want to take advantage of Labor Day deals then it’s important to plan ahead and know the schedules of drug, grocery and liquor stores in your area. Here’s what you need to know about what stores open on Labor Day.

In 2018, Labor Day is Federally recognized on Monday, September 3. Fortunately, most stores will be open over the Labor Day weekend and on the following Monday.

Major drugstores are open on Labor Day. For Labor Day, most national drugstore chains are going to be open.  If they’re usually open on weekends, independently owned or local drugstores will most likely be open over the holiday weekend, however, this may vary from pharmacy to pharmacy, and the best way to make sure is by contacting them.  Here are some of the major drugstores which will be open on September 3, 2018:

Drugstores usually begin their weekly advertising schedules on Saturday, which means that you can find some Labor Day discounts and sales starting on September 1. Drugstores may also have special holiday weekend promotions, or three-day sales, from Saturday, September 1, to Monday, September 3. If you are still getting your kids ready for back to school or you want to stock up on bathroom & over the counter medications, these sales are great.

Most major grocery stores are open on Labor Day. If you’re asking which stores open on Labor Day, part of the answer is all major grocery stores will be open. It’s important to note some stores may be operating according to their normal Sunday hours, or special holiday hours. Grocery store hours are largely dependent on the region where they’re located. It’s, therefore, a good idea to contact your local grocery store and confirm whether or not they will be open. For the holiday weekend, all grocery stores will most likely the operating according to their normal business hours on both Saturday and Sunday.

Independently owned grocery stores, local stores, and ethnic grocery stores will most likely be open over the holiday weekend if they normally operate on Saturday and Sunday. It is still best to call them and find out whether or not they will be open on Monday, September 3. Here is a list of major grocery stores that will be open:

Most grocery stores utilize a weekly advertising schedule. So you should start to see 2018 Labor Day deals on Wednesday, August 29. The main Labor Day grocery sales deals usually include snack & luxury foods, and outdoor play equipment. This is because Labor Day is typically the last big outdoor summer weekend and usually marks the start of the football season.

In 2018 the bigger retailers like Walmart, Target, and Amazon are running specific enterprise-wide Labor Day sales.  For smaller grocers such as Winn-Dixie and Safeway, you’ll need to check specific sales at their locations. One thing to keep in mind: be nice to the cashiers in the stores, they typically know if there are coupons or deals you should be asking for.

Please note that some grocery stores will have reduced hours on Labor Day Monday. For example, some Giant Eagle locations will open from just 6:00 am to 12:00 am.

Not all liquor stores may be open on Labor Day. Whether or not liquor stores in your area will be open on Labor Day depends on the state in which you live.  Some states have so-called “blue laws” in place. A “blue law” is a law typically based on religious concerns designed to prevent the sale of liquor on Sundays or other important holidays. Because the rules which govern the sale of alcohol often focus on Sunday, it would be best to stock up on alcoholic beverages on the Saturday before Labor Day. Many states in the South prohibit the sale of alcohol on Labor Day.

If you’re wondering about a specific local store, give them a call before heading out on Monday. Otherwise, Happy Labor Day!