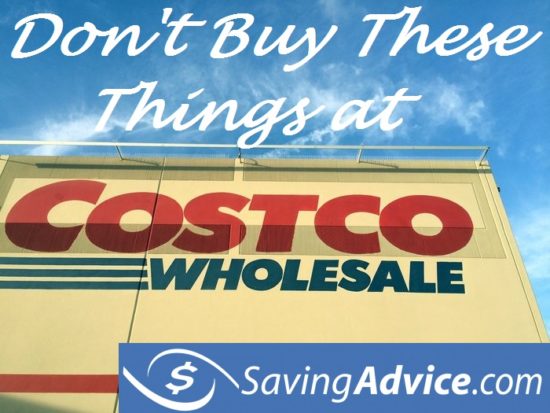 Although the warehouse giant usually beats the competition on the majority of products, sometimes other retailers have better deals on specific items. Here are some things you definitely shouldn’t buy at Costco — followed by a few that are hit or miss or depend on your situation.

Cheaper or Better at Other Stores

Although flip flops are pretty cheap at Costco, you can get them for about a buck by going to a local dollar store.

If you are loyal to a particular brand of diaper, Costco might not have the cheapest prices for them. In many cases, Amazon, Target or Walmart has a better deal.

While Costco’s Kirkland brand toilet paper, paper towels and tissues usually have the lowest price per sheet of any competitor, many people complain that the product feels rougher than all others. This might merit considering other brands if comfort is a priority for you — or if you don’t have room for bulk-sized products (more on that later).

Furthermore, Costco’s other paper products aren’t always the cheapest in every part of the country; in some cities, you can find even lower prices at dollar stores. Additionally, Target, Walmart and grocery stores also have sales and coupons that result on lower prices for paper napkins, paper plates and paper towels.

Too Much of a Good Thing

A lot of what Costco has to offer can be too much of a good thing if you don’t have enough room to store bulk-sized products — or if they go bad before you get a chance to consume them.

Carefully consider your available storage space and the pace at which you consume things before buying anything in bulk. You’re better off spending a little bit more per ounce somewhere else if it keeps you from having to throw out spoiled food or give away items you can’t store.

Here are some of the more egregious examples of bulk sizes being too much of a good thing.

Apparently, sunscreen only remains effective for three years, so if you buy more of it than you can use in that period of time, it’s a waste of money.

Unless you run a restaurant or have a huge family, you might not get through a typical jug of cooking oil while it’s still fresh — many of them only last about six months. The same goes for most spices; you’re better off getting them in smaller sizes elsewhere so you don’t waste anything.

Fruit and Other Produce

Unless you really like a particular type of fruit or have a lot of mouths to feed, you might not get through an entire allotment of produce before it goes bad. Go to a farmer’s market instead to find the lowest prices on fresh fruits and vegetables.

If you’re trying something for the first time, Costco’s bulk sizing might result in your wasting money if you decide you don’t like whatever it is. Get more of a trial size somewhere else and then if you decide you dig it, spring for the bulk buy at Costco to save money on an ounce-per-ounce basis.

Compare Prices at the Supermarket First

Although certain product categories are consistently cheaper at Costco, others are more intermittent. To get the best deals on the following products, comparison shop at your nearest supermarkets to see whether they’re offering sales that beat what the warehouse retailer is asking for:

The Selection Is Random

You’ll find the best deals at Costco for groceries and pharmacy items, followed by office supplies and even housewares. Move away from those product categories and things become more hit or miss. Here are a few areas where the selection is random at best and often not as strong of a deal as what you can find at other retailers.

What You Shouldn’t Buy at Costco

Long story short, your geographic location and lifestyle have as much to do with whether Costco purchases make sense as the factors mentioned above. Ultimately, it’s up to you to decide whether your consumption habits and personal preferences are compatible with buying at Costco or getting something elsewhere.

Readers, what would you recommend people not buy at Costco?

Also, readers, if reading our blog posts make you want to try your hand at blogging yourself, we have good news for you: You can do exactly that right here on Saving Advice. Just click here to get started.