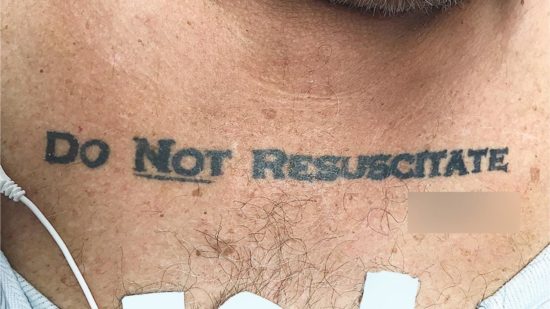 It has become more and more common for people to get medical-related tattoos. In the case of people with allergies, it has saved lives and potentially generated more awareness but how seriously should medically-themed tattoos be taken by doctors? A patient with a “do not resuscitate” tattoo on his neck presented this issue to Florida doctors earlier this year. Just how seriously can a tattoo be taken?


What Happened to the Man With the Do Not Resuscitate Tattoo?

The 70-year-old unidentified man died, ultimately, because of his tattoo. While it may not seem like the ethical thing to do, doctors saw this tattoo and debated saving his life because he obviously felt strongly about the DNR request (or so it seemed).

John Doe was a resident in a nearby nursing home but had been found in the streets with alcohol in his system. When he arrived at the hospital he had no identification and no family was with him. He was also suffering from a number of medical ailments.

Instinctively, doctors wanted to ignore the tattoo, citing an oath all doctors take “invoking the principle of not choosing an irreversible path when faced with uncertainty,” death being the most irreversible path you can take. Doctors on staff in the Florida hospital began to give the man antibiotics, trying to save his life, but they were stopped.

The Ethical Dilemma With DNR Tattoos

In most hospitals, doctors are advised by an ethical consultant and, oftentimes, even lawyers when they are faced with a dilemma like this one. In this case, ethics consultants told doctors they should honor the tattoo, which obviously stated that the patient did not want to be resuscitated or brought back from dire health conditions like he was in.

A report about the incident and the ethical questions it poses for medical professionals was published in the New England Journal of Medicine. The report said ethics consultants, “suggested that it was most reasonable to infer that the tattoo expressed an authentic preference, that what might be seen as caution could also be seen as standing on ceremony, and that the law is sometimes not nimble enough to support patient-centered care and respect for patients’ best interests.”

Once the ethical consultant’s advice was heard, doctors wrote a DNR request that was to be filled out by a social worker. When the DNR came back, doctors pulled the patient off any treatment he was receiving and he died later that evening.

Should You Consider a Medical Tattoo?

All in all, authors of the report said that the “do not resuscitate” tattoo created far more confusion for doctors than clarity. If you want to make it known that you don’t want to be resuscitated, carry a medical card stating so or have it written in medical files. Don’t rely on someone reading your tattoo to know what you want. (Read more about creating a will and preparing your finances.)

Do you think doctors should have kept the unidentified man alive?