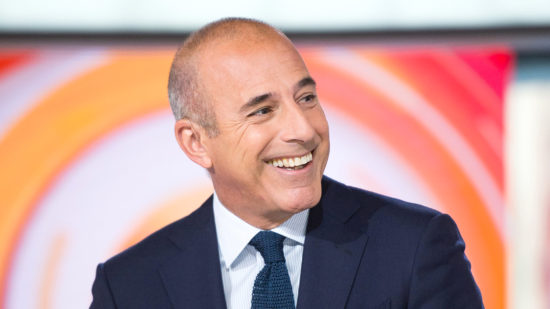 Veteran anchor of “The Today Show,” Matt Lauer, has been fired from NBC after appearing on the network for more than 20 years. Over the years, Lauer has been adored by many and his NBC salary showed it. His contract with the network slated him to make $20 million a year. His departure will certainly put a damper on his annual salary but how will being fired from NBC affect Matt Lauer’s net worth?


Matt Lauer has been a household name for years as the host of “The Today Show.” On Wednesday, November 29, 2017, it was announced that Lauer was fired from NBC. His co-anchors, Savannah Guthrie and Hoda Kotb, announced the firing on air Wednesday morning shortly after they learned of Lauer’s dismissal.

Guthrie remarked that she and Hoda were devastated and “still processing” the news. A memo was sent to NBC employees Wednesday morning stating they’d decided to fire Lauer after receiving a detailed complaint from an employee Monday night. NBC investigated the complaint further on Tuesday and Tuesday night Lauer was phoned to be informed that he would be let go.

Although this was only the first complaint filed against Lauer in his 23 years with NBC, the network decided to act swiftly in firing him. Network officials say that there is a reason to believe that this was not an isolated incident.

Lauer’s career hasn’t been covered in controversy. In fact, he has been a beloved public figure for decades. From 1992 to 1993 Lauer filled in as a newsreader on NBC when needed. He also filled in for anchors and co-hosts on “Weekend Today,” “NBC Nightly News,” “NBC News at Sunrise,” and “The Today Show” (before he became the host).

After graduating from Ohio University in 1997, at the age of 39, his career really began to take off. Former “Today Show” host Bryant Gumbel stepped down from his position, opening the door for Lauer. Because he always had a great on-air presence, giving him the spot on “The Today Show” was a no-brainer for NBC.

Since 1998, Lauer has served as the host on “The Today Show.” In 1998 he began a segment called “Where in the World is Matt Lauer?” The segments featured Lauer in different places throughout the world with him explaining the importance of each. After his “Where in the World” segment was grounded due to the falling economy, he took his spot as the host on “The Today Show.”

Since then he has had noteworthy interviews with big stars, reported about major events, and asked questions people wanted to know about. In addition to his duties on “The Today Show,” Lauer also has hosted programs on the Discovery Channel and MSNBC.

There is no doubt Lauer’s career has been successful. After starting as a stand-in for anchors, he moved his way up the corporate ladder at NBC. Losing the position will undoubtedly have an impact on Matt Lauer’s net worth.

Lauer had a contract with NBC through 2018 that would pay him $20 million per year. Not only will he be losing that cash next year, but his reputation has now been damaged. He won’t likely get another job as a major network news anchor (or even a local one). Sources estimate his net worth to be anywhere from $25 million to $60 million. He has been the third-highest paid host on television for years, just behind Ellen Degeneres and Judge Judy.

In addition to his work on NBC, Lauer has filled in for anchors on other networks and he’s also appeared on sitcoms like “Will & Grace.” He has been asked to speak at graduations and has been looked upon with favor throughout his career.

The former NBC host joins a growing list of public figures being forced to step down amidst allegations of sexual misconduct. Fox News’ Bill O’Reilly was fired for similar allegations months ago. Just last week, comedian Louis C.K. was accused of sexual misconduct as well. There is no telling how each of these events will affect the celebrities, however, one thing is for sure: Matt Lauer’s career with NBC ended today and it will likely have a heavy impact on his wealth in the future.