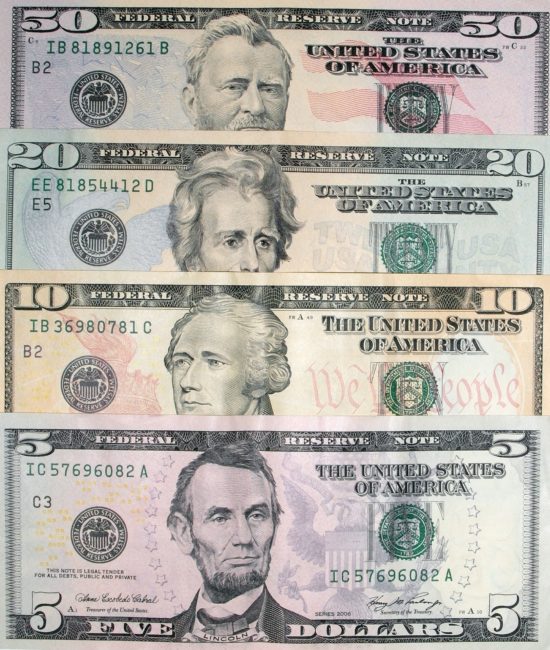 Many of us find motivation in money – whether it be earning, investing, or saving it. Some people even say they are “motivated by Benjamins.” Here are a few inspirational quotes from presidents on money that will help you find motivation in every dollar.

The only limit to our realization of tomorrow will be our doubts of today. – Franklin D. Roosevelt

Soon after his death in 1945, Roosevelt’s face was added to the dime. This was to honor his founding of the March of Dimes to help kids with polio.

To contract new debts is not the way to pay old ones. – George Washington

There’s no question as to why George Washington is present on the dollar bill and quarter. As one of our founding fathers and the first president of the U.S., he had a huge impact on the nation. His photo was put on the dollar seven years after the bill was put into production.

The $2 bill isn’t all that common. It has been in print since 1869, however, the U.S. government discontinued them in the 90s – despite multiple campaigns to increase the bill’s popularity.

My dream is of a place and a time where America will once again be seen as the last best hope of earth. – Abraham Lincoln

Abraham Lincoln was president during one of the most trying times in United States history. Lincoln, who has been given the credit for ending slavery, has appeared on the $5 bill since 1914.

You must pay the price if you wish to secure the blessing. – Andrew Jackson

Andrew Jackson was the 7th president of the United States. Since being placed on the bill in 1928, there have been many petitions to remove Jackson from the $20. This is largely due to his polarizing political stances while he was in office. Suggestions for replacements have ranged from Harriet Tubman to Ronald Reagan.

I have never advocated war except as a means of peace. – Ulysses S. Grant

Ulysses S. Grant is most famous for his work as a Civil War general. He was also the 18th president of the United States and has been lucky enough to be included in the short list of presidents on money. In the past, there has been legislation to change the face of the $50 but Congress has turned it down.

That’s all a man can hope for during his lifetime – to set an example – and when he is dead, to be an inspiration for history. – William McKinley

If you don’t quite remember learning about McKinley economics in school, there is a good reason for it. For one, you probably don’t see the $500 bill very often. He was also assassinated in 1901 after a very short time in office.

A truly American sentiment recognizes the dignity of labor and the fact that honor lies in honest toil. – Grover Cleveland

The $1,000 bill is so uncommon that one sold for $2.3 million in 2006 to an art collector. An oddity that makes sense for Cleveland since he served as both the 22nd and 24th president of the U.S., which make him the only president in history to serve non-consecutive terms.

James Madison is considered to be the father of the Constitution and served as the 4th president of the United States. The $5,000 bill is discontinued, however, if you were to come across one it could prove to be worth much more than $5,000.

The man who is swimming against the stream knows the strength of it. – Woodrow Wilson

The $100,000 bill is the largest note ever printed and displays the face of Woodrow Wilson, the 28th president of the U.S. There was not large production of this bill. The federal government used it to transport money during the Great Depression.

5 People Who Aren’t Presidents on Money

Not every face that appears on currency is a past president though. Below are five people who aren’t presidents on money.

Readers, what about these quotes from presidents on money inspires you? Let us know in the comments.