The high-cost of housing may be taking its toll: foreclosures are surging in New York City. Is this a fluke or do NYC foreclosures show an early sign of trouble? 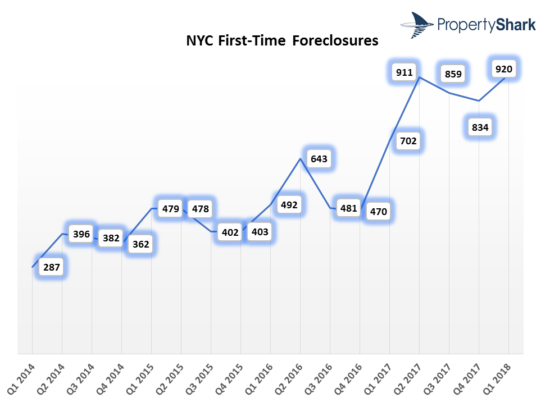 Although a likely contributor might be rising interest rates, the effect doesn’t appear to be consistent nationwide.

Another sign of the trend, however, has appeared in plunging auto sales attributable to stricter credit terms and higher payments.

But while the decline in car sales was just over 4% annually nationwide, the rise in New York foreclosures was 58% annually.

And some parts of New York City have had seen an acceleration in foreclosures: They’ve soared 226% annually in Staten Island and 64% in Brooklyn from the first quarter of 2018 compared to the same period of time last year.

Although housing in many parts of the country have been unaffordable for some time now, the most expensive real estate market in the U.S. is so far not seeing a spike in foreclosures like New York is. Home prices in the greater San Francisco Bay Area continue to keep climbing, but mortgage delinquencies keep falling, according to The San Jose Mercury News.

Although it’s possible that a national trend might emerge along the lines of what’s happening in the Big Apple, a likelier explanation for the spike in NYC foreclosures may have to do with local policies related to housing.

Readers, does the spike in NYC foreclosures concern you at all?

If you liked this article, you just might enjoy these other stories in our archives.