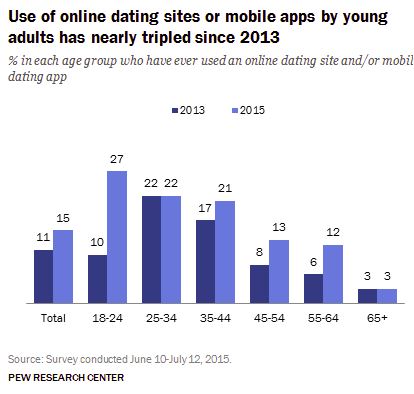 Pay for online dating apps only if you have the extra money to burn.

Although online dating itself has been around long enough for it to be considered downright mainstream, paying for premium versions still isn’t.

All but a small percentage of the population doesn’t pay for the premium version of dating apps, but most of them who do pay for them happen to be male and looking for a casual hook-up rather than a long-term relationship.

Various premium versions account for 3.26% of users of the leading mobile dating app for heterosexuals, Tinder. Although some 46 million accounts are on the mobile app, just 1.5 million of them involve some form of paid version.

Interestingly, a survey of 300 Tinder users — perhaps not large enough to be a random sample, but bear with us because the finding seems spot on — by would-be competitor Hinge found that 81% have never found a long-term relationship using Tinder.

Another survey of 973 people by OnePoll.com found that about 7 in 10 women using Tinder have received sexually explicit messages on Tinder. That same survey found that 6 in 10 men using Tinder were only looking for flings or short-term entertainment.

Apparently none of this stops people from trying their luck anyway on Tinder — during the month leading up to Valentine’s Day, people send 63% more messages than any other time of year.

People who want those long-term relationships apparently find them on other apps besides Tinder. A survey by Figleaves  says that 46% of people who’ve used online dating websites and apps have found their current partner that way.

Don’t infer that to mean that you should only go premium if you want something short-term as well, since paying for a dating app might give you the ability to make yourself more visible to people who are serious about finding love.

Remember that if you do decide to pay for an online dating app, it auto-renews every month unless you turn it off — and it’s not always easy to cancel. In the case of mobile dating apps, you might need to take extra steps like changing your settings in the app store.

Readers, have you paid for any dating apps, and if so, which ones? What kind of results have you gotten from online dating?