"The reason most people never reach their goals is that they don't define them, or ever seriously consider them as believable or achievable. Winners can tell you where they are going, what they plan to do along the way, and who will be sharing the adventure with them." - Denis Watley

You are vulnerable to a particularly scary type of abuse that can deprive you of control over your home, assets and personal freedom — unless you file an often overlooked and misunderstood legal form called a power of attorney. 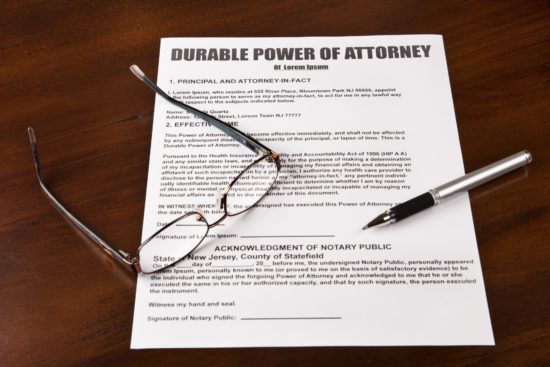 The power-of-attorney form gives someone else the ability to act on your behalf.

While it’s most commonly associated with situations leaving a person mentally or physically incapacitated long term, there are also shorter-term scenarios in which you might need someone to sign documents or make decisions for you — like when you’re out of the country or hospitalized.

Although living wills often contain power-of-attorney clauses, filing an additional form that specifically focuses on power of attorney gives you more control over who can act on your behalf.

It Happened in Las Vegas

Setting up a carefully worded power of attorney today, while you are healthy, can protect you from the kind of swindlers who duped 150 retirees out of all their assets.

A Las Vegas grand jury indicted the perpetrators in March, but the stolen funds have already been spent and are apparently unrecoverable.

According to this indictment, the four employees of A Private Professional Guardian LLC fraudulently used their status as a legal guardian to obtain control of the victims’ assets and decisionmaking ability.

The criminals liquidated everything the victims owned and had the seniors committed to facilities that they didn’t want to be in. Many of those who lost money actually had written wills that somehow didn’t protect them from the racketeers.

With Or Without a Will

So if you have retirement plans in which you’ve designated beneficiaries but have yet to write a will, the power of attorney form might be a good interim step because it doesn’t require you to take an inventory of your assets nor make any decisions about who should get what.

On the other hand, you might want to file the power of attorney form at the same time as a will to rein in court fees.

You can file the power of attorney without writing a will, but the form goes to the same court — it’s called probate it’s often a department within a jurisdiction’s family court.

Take It to Court

Without filing the form to a court, it can be difficult to enforce and might not help you accomplish your goals. While the court filing fee might put you out a couple of Franklins, it will seem like a trifle compared to what you stand to lose if a third party swoops in and files a power of attorney in order to seize control of your assets.

If you want to avoid legal fees at all costs and are willing to only address power-of-attorney at the end of your life, you could fill out an Advanced Directive form from the National Hospice and Palliative Care Organization.

The form indicates that you can file a copy of it to the registry maintained by your state’s attorney general, but the links aren’t necessarily up to date, so click here to the correct location in Google search results.

About eight websites offer starter versions of power-of-attorney forms for free but most eventually charge money for premium services — on some sites, this includes custom answers to questions fielded by attoneys.

Many of the sites have a free initial trial period for limited access to a full buffet of legal forms and then begin charging monthly rates. Others only let you look at the forms for free but charge money when you want to customize and print them.

If you expect you might need to update and resubmit any of these forms or if you have other legal needs — like owning a business — the subscription versions of all these sites are much cheaper than what it costs to hire a lawyer (depending on the location and experience level, most attorneys bill between $200 to $1,000 per hour apiece).

Where to Get Forms

Here are all the legal forms sites that have power of attorney forms:

Five Kinds of Powers of Attorney

Lawyers actually describe five different categories of powers of attorney, based on the time and scope of the authority being granted. The person creating the authority is known as the principal, while the one who receives that authority is known as an agent, and you can also opt to have two co-agents or set up one agent as primary and another as contingent or backup.  Here are the five:

While the difference between the five might seem like semantics to the layperson, apparently the terms have meaning in court and populate accordingly on whichever form wizard you might choose to put yours together. Ultimately, this is something that you might describe as better safe than sorry — otherwise, it’s possible you might not know you needed it until it’s too late.

Readers, have you thought about creating an estate plan and if so, what have you done in the way of preparation?