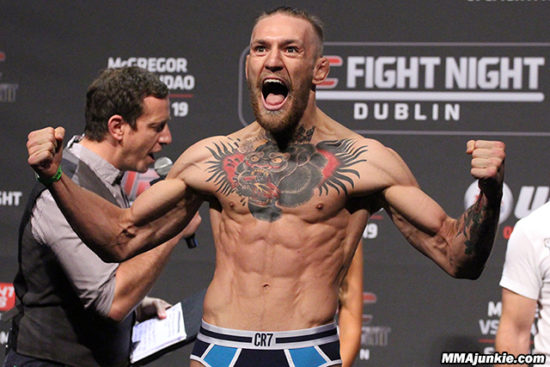 One of the most anticipated sports events in history is coming up on Saturday. Undefeated boxing champion Floyd Mayweather will go head-to-head in a boxing match with UFC champ Conor McGregor. It has been said that each fighter will make hundreds of millions of dollars if they are able to squeeze out a win. So, what is Conor McGregor’s net worth and how will this fight impact his wealth?

The first thing you should know about Conor McGregor (and what he makes known to the public) is that he is Irish and extremely proud. He was born in Dublin and has spent his entire life in Ireland. McGregor and his long-time girlfriend are celebrities and even have a mural painted in their honor on O’Connell Street.

Those who live in Ireland love McGregor because he’s so proud of his heritage and he can really fight! He began his ammeter career in 2007 and worked his way into professional fighting within a year’s time. After six years of fighting he signed with the Ultimate Fighting Championship (UFC). Since signing with UFC, he’s had the chance to face dozens of other professional fighters.

What has made him so successful is that he doesn’t only fight but he also wins (and he brings in tons of cash for UFC). Throughout his career McGregor has been the headliner on some of the highest-earning pay-per-view events. His match against Nate Diaz had the most PPV buys in UFC history.

McGregor is known for his in-your-face attitude and fighting style, which has led him to the upcoming boxing match on Saturday. While he’s not a boxer, per se, McGregor has no doubt that he will beat Floyd Mayweather in the ring. Many people have called it a publicity stunt but either way McGregor is going to make a pretty penny from the match. So, how will Saturday’s events impact Conor McGregor’s net worth? 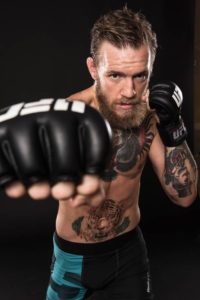 McGregor has stated on multiple occasions that this fight (to him) was a no brainer. According to McGregor, he has the opportunity to multiply his net worth overnight with the fight. Currently Conor McGregor’s net worth has been estimated to sit somewhere around $35 million (though some sources estimate it to be higher.

When it comes to endorsements, McGregor makes about $7 million a year. Most of Conor’s cash has stemmed from his fighting career though. He earns tens of millions of dollars per fight, making him one of the highest earning athletes in the world. The Mayweather fight, however, will be McGregor’s highest paid fight yet.

The UFC champ makes about $30 million a year and, if he’s able to defeat Floyd Mayweather, he will make $75 million (and possibly as much as $150 million) after the match Saturday. He will also be able to land a ton more endorsement deals and sponsors if he is able to pull out a win as well. Whether McGregor will win or not has yet to be seen, but one thing is for sure: Conor McGregor’s net worth is about to skyrocket.

If you’re interested in the McGregor-Mayweather fight, also check out Floyd Mayweather’s net worth.