Maybe you should rethink whether it’s in your best interest to postpone your retirement.

Although people have been retiring later and also planning to work part time during retirement, ilness or layoffs often force people to retire before they had planned or go on disability.

Unfortunately, this is arising at a time when the federal government is mulling whether to push the age of retirement still further out into the horizon than it’s already headed. 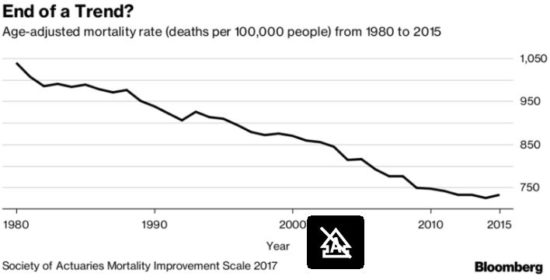 While starting later means larger-sized benefits payments, once you tally up all of the checks over the course of someone’s retirement, it’s supposed to average out to be the same — or at least, that’s the intention.

The fact that these numbers average out to the same lump amount in aggregate might on its own merit reconsidering what age to retire at, but changes in mortality rates and average lifespans would only strengthen that.

A couple of recent studies suggest that the growth in average life expectancies has tapered off, and older workers appear to face less active retirements than what their parents enjoyed.

Death rates across age groups have risen 1.2% from 2014 to 2015, according to the Society of Actuaries. This was the first time there has been an increase greater than a full percentage point since 1980.

The U.S. Centers for Disease Control also found that average lifespans have stopped going up — they had risen from just under 77 in 2000 to 79 in 2015 — and now, they’re actually 2.5 months lower than the peak.

The CDC attributed the falloff to a spike in opioid overdoses. Deaths from this drug category surged from nearly 2,100 in to more than 13,200 in 2002.

In a related trend, alcohol abuse and suicides are also contributing to the increased mortality rate among middle-age caucasians.

The leveling off of the mortality rate may indicate that people have already realized the benefits of the reduction in smoking and more advanced medical treatments for diseases. Additionally, obesity rates are rising.

Another factor expected to impact mortality rates: growing prevalence of respiratory ailments resulting from increased pollution, along with a host of anticipated illnesses ensuing from pathogens migrating north from the tropics to changing climates.

It’s unfortuate that mortality rates and illness are rising when Americans feel the need to postpone retirement, although the causes of that are mixed — some simply can’t afford to retire earlier, others have the objective of funding retirements that extend past age 90, while still others derive satisfaction from continuing to work.

Nearly a third of Americans between the ages of 65 and 69 still work at least part time, along with nearly 20% of those in their early 70s, according to data from the Bureau of Labor Statistics.

Yet a study published in Health Affairs suggests that the prevalence of cognitive decline and physical disability has risen among those who need to work longer before retiring. 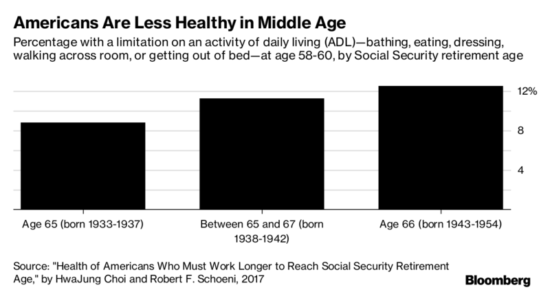 Should You Really Postpone Your Retirement?

If having to work longer in order to retire only curtails the amount of time one has to enjoy retirement, then it would seem like postponing retirement might defeat the intended purpose of putting in all that extra time with one’s nose to the grindstone.

All too often, being able to choose exactly when to retire is a luxury few can afford. But it doesn’t help that the amount of money it takes to fund retirement keeps growing.

Readers, what are your goals for retirement? How old would you like to be at retirement and how much money do you wish to set aside for it?