In today’s low-interest-rate world, equities have become more important than ever. That’s not just for people in their working years, either. In retirement, it’s true that you’ll probably want to take a more conservative approach than you did for most of the rest of your life. But most successful retirement plans are going to depend on some equity exposure.

Still, equities can be volatile. And retirees don’t need volatile. Ask anybody who had retired (or was about to retire) heading into the last big bear market a little more than 10 years ago. If they were riding the bull-market wave and decided to keep riding it, they likely crashed hard. If they had been dialing their equity exposure down as they headed for retirement, they probably emerged bruised but not broken.

Using the WealthTrace financial planning application, we ran a series of equity-heavy portfolios through the program’s Bear Market Scenario tool, and in every case, the results were ugly. No surprise there; stocks get hammered in a bear market by definition.

Send In The Bucket Brigade

If you have played your cards right as you approach retirement age, you should have money squirreled away in various investment accounts. You might have a 401(k) account, an IRA, maybe even a Roth IRA or a Health Savings Account (HSA) that has some funds in it. And if you have stuck to low-cost investments and haven’t needlessly traded in and out of them, all while contributing to them and rebalancing them over time, the accounts have likely flourished.

So now you might have a lot of different asset classes (like stocks and bonds) in these various accounts. Where do you begin when it comes to withdrawing these assets so you can live on them?

From a high-level tax perspective, there are some basic rules as to how this should go. Normally, you would draw down from the taxable and tax-advantaged (like a Roth IRA) accounts first, and go for the qualified tax-deferred accounts (like a traditional IRA) later. Within the first group, you might need to tweak your withdrawal strategy a bit so you’re not realizing huge capital gains that you’ll have to pay taxes on.

There is another way of looking at the process besides how taxes come into play. It essentially has to do with asset classes, and it’s called a bucket strategy.

There’s no one correct definition of a bucket strategy. But it refers to the idea that you maintain groups–or buckets–of assets that you’ll be using to cover expenses in retirement. Those buckets, whether actual separate accounts or virtual ones (more on that in a minute), are sorted mainly by when they will be used, and partially by what they’re made up of.

Bucket One: Cold Hard Cash (or its equivalent, like a money market account or a short-term government bond fund). This is the most obvious one in that, for near-term, day-to-day living expenses, you really don’t want to take a chance that an investment–like an ETF with equities in it–could lose its value suddenly. Cash is subject to erosion due to inflation, but that doesn’t normally happen overnight.

Still, you don’t want any more of your investment money in cash than necessary. What’s “necessary” will be up to you, and will depend on your risk tolerance. Does “near term” mean a year, or five years? It’s probably going to be somewhere in between.

Bucket Two: Bonds and Dependable Dividends. This second bucket moves up the risk ladder a bit with some income-generating investments. These might include real estate investment trusts (REITs), master limited partnerships (MLPs), stocks that pay solid and perhaps growing dividends, and bond funds. Funds that are generated here will be moved to bucket one as necessary; excess funds (and we hope there are excess funds!) will be reinvested in this bucket’s investments.

Bucket Three: Growth Stocks. Remember the volatility we were talking about? Hopefully, most of it will be concentrated here. That’s because this bucket will contain the assets we’ll need last. That means greater return potential, but greater risk (as measured by volatility) too. Growth stocks will be the most obvious choice for this bucket. As gains are realized here, they will flow to bucket two.

That’s a basic bucket strategy, and a fairly common one, though with myriad variations.

We mentioned “virtual” accounts earlier. What we mean by that is you may not want to actually open new brokerage accounts to create three (or however many) buckets. Doing so might be messy, requiring you to transfer assets from one existing account to another or even realizing gains you don’t want to realize.

Managing the buckets “virtually,” meaning basically in your head, is probably better. For example, say you want two years’ worth of living expenses in cash and equivalents. You could scrape that together from various existing brokerage accounts and deposit it into your savings account so it’s all in one place. Or, you could keep track of where the cash already is, and draw on the various accounts as needed. That’s the virtual version. 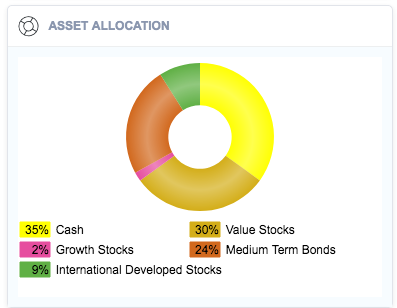 Variations On a Theme

One could write a book of bucket strategies. No two are exactly alike, because everyone’s needs, risk tolerances, and investments are different. Regardless of how the assets are allocated or how many buckets you’re using, you’ll need diligence, a good understanding of your tolerance for risk, and the right tools to help you keep track of your system.