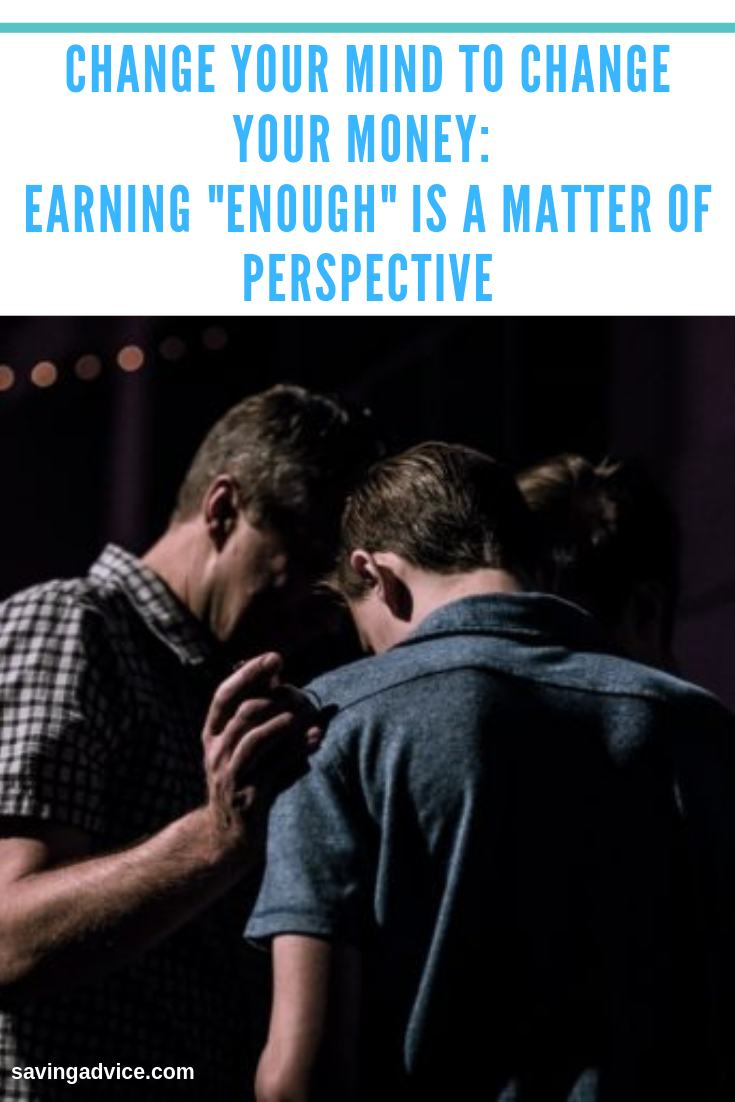 The average North American never feels like they have quite enough money. There are always more bills to pay, more things to buy, or even more savings to set aside for later. The funny thing is, we always think that if we get just a certain amount more, then we’ll have “enough.”

But it never happens. If we reach the imaginary goal, the goal changes, an ever-shifting line in the sands of our financial perception. Is it possible to ever feel like we have enough? Yes. But the answer isn’t in a number. It’s all in our own perspective.

We Compare Ourselves Unfavorably to Others

There are many complex psychological and social reasons why we never feel like we have “enough.” According to a recent CBC Business News report, the leading factor causing us to feel inadequate about our money is the human brain’s tendency to compare ourselves to others. Our minds do this naturally when it comes to many different factors in life. We can’t help it. But when it comes to money, we are particularly vulnerable.

The problem is that we tend to only compare ourselves to those who have more than us. We don’t look at people who earn less than us and think, “oh, wow, I earn so much more than that person.” Instead, we look at those who earn more than us and long to have what they have. It’s a trick of the brain that leaves all of us vulnerable to constant feelings of financial inadequacy.

Comparing Ourselves to the Super Rich

Several things in modern times have made this problem worse. One of the biggest is the increasingly large gap between rich and poor. More specifically, there are people in the world who earn grotesquely large amounts of money. If you compare yourself to someone who has billions, then you’re always going to feel like you don’t have enough.

There is a persistent idea in our society than anyone can become super-rich. You can win a reality TV show and instantly get one million dollars. Or you can win the lottery. Or while still in your twenties, you can launch the next amazing start-up company. If you haven’t succeeded at attaining millions, or preferably billions, by mid-life, then society can make you feel like you’re failing.

The Problem of (Social) Media

The persistence of rich life imagery today exacerbates the problem. There are countless reality television shows devoted to showcasing the lives of the rich. Social media makes everyone lives look so much better than our own. Somewhere in our minds, we know that most people aren’t celebrities. We realize that people post their best days on social media and manipulate their images accordingly.

Nevertheless, our brains compare. We begin to believe that those people have amazing lives that are so much better than our own. Furthermore, we believe that if we got just a little bit more, then we would be happy as well.

Our Own Peer Group Doesn’t Help

Of course, the people we spend the most time with are usually our peers. They are our coworkers who earn salaries comparable to ours. They are the people who attend the same events as us, live in the neighborhoods that we do, send their children to the same schools. Clearly, we more or less must make the same amount of money as them. So why does it still feel like we need more?

The first reason is the age-old concept of feeling like we have to “keep up with the Joneses.” We see our neighbors spend more to upgrade their homes, so we do the same. Our friends post stunning vacation destination photos on their Instagram, and we pull out the credit card to book a similar trip. We don’t compare ourselves to our peers by what we each earn. In contrast, we make comparisons about what we perceive each other as spending. This leads to overspending, which ends up making us feel like we don’t have enough.

Comparisons to others aren’t the only problem. We face a lot of mental challenges to ever feeling like we truly have enough. For example, we’re prone to a phenomenon called Hedonic Adaptation. It’s a fancy term that basically means we quickly adjust to whatever we have. If you earn $50,000 per year, and that doesn’t feel like enough, then suddenly changing to a job where you earn $100,000 per year should feel abundant. It will – for a moment. But thanks to our brain’s ability to adapt, we’ll quickly go back to feeling the same way that we did before. We’ll adjust to a $100,000 income, and it won’t feel like enough. Likewise, if that doubles to $200,000 annually, it still won’t feel like enough. The initial surge will be awesome. Then it’ll fade. The same old feelings will come right back. We adapt, for better or worse.

The Only Answer is to Change Your Perception

If we can adapt to earning more, then couldn’t we also adapt to earning less? Yes. We see a variation on this when people have children. If you’re earning $50,000 per year as a single person, and someone asks you how you would afford kids, you might have no clue. But if you have a child, you make the money work. You may feel an initial financial strain, but ultimately, you basically mentally balance out where you were before. You have to spend more, you’re not earning any more, and yet you feel the same as you did before about your money.

How to Change Your Money Perception

This sounds terrible. How can we ever feel like we’re earning enough if no external circumstance can change our feelings? The answer is that we have to change our feelings from within. We have to alter our perspective in order to feel like we already have enough. Recognizing that there is no magic number that will suddenly feel satisfactory, we have to find ways to feel satisfied with exactly what amount of money we have right now. We must embrace an abundance mindset.

Here are some tips: