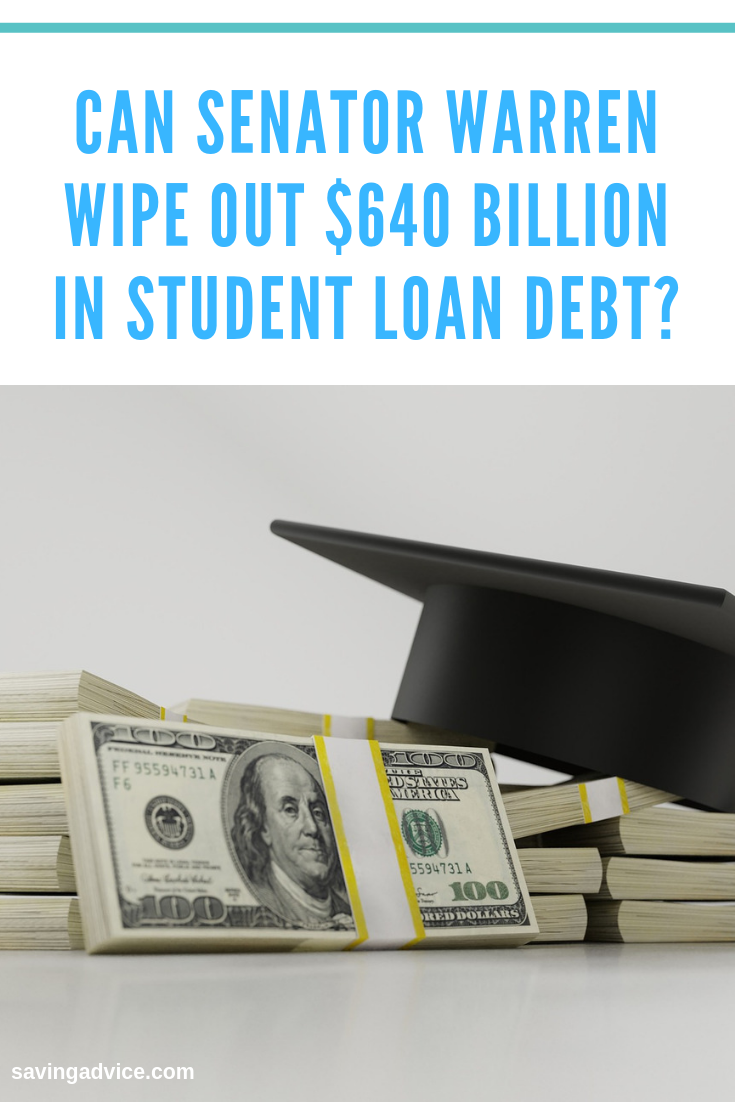 As April 2019 drew to a close, Senator Elizabeth Warren revealed an ambitious plan to help American families overcome student loan debt. If the plan was implemented, about 75 percent of Americans with student loans would see their debt vanish. For another 20 percent, at least some of their student loan obligation would disappear. But can Senator Warren really pull it off?

Households with federal student loans wouldn’t even have to take action. Since the government has access to their loan and income data, it could be handled without the family having to take any steps. Private student loan debt would also be eligible in the plan, but the government would need to work with borrowers to get the loan details and coordinate the debt elimination with the lenders.

Many lower- and middle-class families struggling with student debt would get some relief, especially since the debt elimination wouldn’t be taxed as income. Senator Warren equated the plan to “an enormous middle-class stimulus that will boost economic growth.” And she didn’t stop there. If her plan was implemented, about 42 million Americans would at least get partial relief from their student loan debt.

Another part of Senator Warren’s policy that could have a massive impact on American families is her plan for universal free college. She wants to make two- and four-year public colleges available without any tuition or fees, significantly limiting how much a person would have to spend while pursuing higher education.

While that plan might not bring the cost of college to zero – as it does not address other expenses like room and board or supplies – to say it would make a substantial difference would likely be considered an understatement.

The Drive for College Degrees

Many Americans believe that a college education is critical for their future success. One 2012 Pew study showed that 94 percent of parents with children under the age of 17 expected their kid to go to college.

Employers are also increasingly seeking out workers with college degrees. One study by Georgetown indicated that 65 percent of jobs in the US would require at least some level of higher education by 2020.

Most who oppose Senator Warren’s plan first point to the price tag, which is estimated at $1.25 trillion over 10 years for both the debt elimination ($640 billion) and universal free college components. To put it simply, eliminating that much student loan debt and making college free wouldn’t be cheap. However, Senator Warren says she has a plan for that too.

She would like to fund her plan through an “Ultra-Millionaire Tax.” Families with $50 million or more in wealth – a total of about 75,000 households – would be subject to a 2 percent annual tax, which Senator Warren says would cover universal free college and the debt cancellation.

However, many legislators believe that Senator Warren’s plan is just too expensive. Additionally, some think it would be unfair to erase student loan debt when so many others have already paid off their hefty loans.

Concerns about ensuring schools would control their costs have also been expressed. Since 2001, tuition at four-year institutions has risen over 100 percent (including after being adjusted for inflation).

Can Senator Warren Wipe Out Billions in Student Loan Debt?

In her position as Senator, she does not have the power to move ahead with this plan alone. She would need significant backing from Congress and the President to turn this vision into reality, as it would have a massive impact on the budget.

If Senator Warren was elected in 2020 to become the next President, she could also then try to push this plan forward. However, since it would involve updates to the tax code (to implement her Ultra-Millionaire Tax), changes in the US educational system and funding dedicated through the federal budget, putting it into motion without the support of Congress would incredibly unlikely.

Now, if Senator Warren did garner enough support – either while in Congress or if she becomes President – then wiping out that student loan debt isn’t impossible. Similarly, making public college tuition and fee free is technically something that could happen. It’s just important to understand that there is a long road ahead if that is a plan she wants to implement and, without the proper support from other key government officials and legislators, it probably won’t become a reality.

Are you struggling with student loan debt? Do you think Senator Warren’s plan is a good idea? Tell us about your experience an share your thoughts in the comments below.