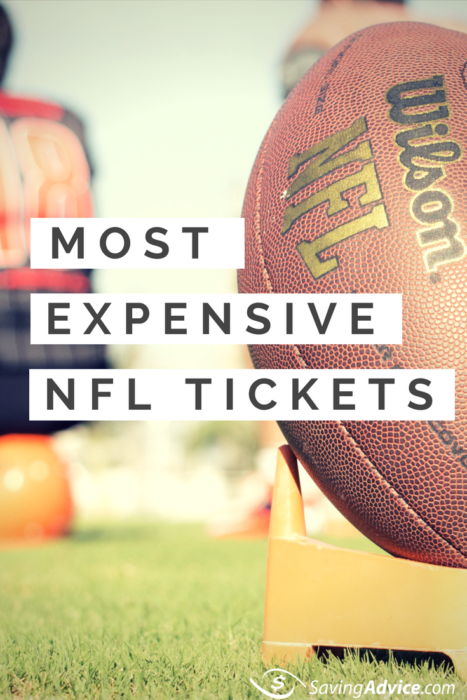 Football season has begun and many people will be looking to score a seat at their favorite team’s game this year. If you’ve been to a game recently, you know how expensive it can be. And, depending on your favorite NFL team, you may be paying more than others. Below are the top 10 most expensive NFL tickets.

Each year Vivid Seats breaks down the ticket trends for the previous year, giving people an idea of what to expect. According to their predictions, the teams below will have the most expensive tickets in the NFL in 2018.

The most expensive NFL team to see at home is the New England Patriots. Even though the team has seen its share of controversy, the Pats still have a loyal fan base that are willing to pay a boatload of money to see them play.

Seattle is the second most expensive team to see play on their home field. The average price paid for Seahawks tickets hovers just over $320.

Green Bay fans don’t get much of a break when it comes to seeing their team play at home either. The average price paid is over $310.

Denver fans are also paying around $300 per ticket when they want to see the Broncos at home.

Fifth on the list of most expensive NFL tickets is the Philadelphia Eagles. Although tickets are below $300 (on average), fans are still paying a pretty penny to see them in Philly.

The Jaguars are the next expensive team to see at home. The average price paid per ticket, listed below, is still half of what people are paying to see the Patriots.

Next on the list is the Tennessee Titans. Football is huge in Tennessee and fans will pay quite a bit of money to be in the stadium.

Bears fans are paying an average price of $252 per ticket to see them play in Chicago.

Number nine of the list is the Texans. To catch the team in Houston, fans are paying around $243 (though there are tickets that are cheaper or more expensive).

Last on the top 10 most expensive teams to see is the Steelers. To see the team play in Pittsburgh you’ll be paying around $240 per ticket, on average. Of course, certain games may prove to be cheaper than others. If you plan far enough ahead, you’re more likely to score a good deal.

If you’re looking for a more affordable NFL experience, you may want to consider purchasing a ticket when your team is away. These are the 10 NFL teams with the cheapest seats this year.

New York Jets fans are in luck. The average price paid is nearly half of what you’d pay to see the Steelers and a quarter of the price to see the Patriots.

The average ticket price to see the Chiefs play at home hangs right around $123.

Bengals fans are in luck as well. To see the team play in Cincinnati, you won’t pay much more than $110.

Tickets in Cleveland are even cheaper. Browns fans can see them play at home for less than $110, on average.

The cheapest tickets in the NFL are in Buffalo. On average, a ticket in the Bills’ stadium costs around $107.

The locations above may be within driving distance of your home, or a cheap train ride. If so, you could save quite a bit of money by attending the away game instead of paying top dollar at home (especially if you’re a Pats fan).

Readers, have you attended an NFL game? What price do you pay? In a staggering admission by the National Football League (NFL), it was revealed that 28% of retired players would develop early-onset Alzheimer’s disease. This statement comes on the heels of years of suits and accusations from former players saying the NFL was not providing adequate health assistance for work-related injuries. For years, the NFL refuted these claims and refused to take responsibility for the long-term health effects directly related to the hard-hitting contact sport.

The findings were presented by a group of actuaries that were hired by the NFL in their defense against over 5,000 ex-players looking for settlement of their health issues. It was found that 28% of all retired players would develop Alzheimer’s disease at an earlier age than the general public. In addition, more players would be subject to other neurocognitive diseases as compared to the general public and their age ranges. This admission by the league comes at the end of a prolonged period of consistent denials and claims that they should not be responsible.

The findings will result in an increase in funding to be made available for these players and these specific injuries. The NFL had an existing fund of $675 million to be attributed to these health issues, and they will be paying out roughly $900 million to those players who are found to suffer from early Alzheimer’s and neurocognitive disease. Spokespeople for the league are now owning up to what was previously refuted time and time again. They have admitted that they play a part in these diseases developing earlier and that they must continue to take care of their ex-players.

The past decades have seen an increase in medical advancement and the examination of the effects of contact sports on player’s brains. In a sport where concussions are prevalent, leagues have taken new measures to ensure that player safety is a primary concern for both current and ex-players. Concussion testing has taken on new steps and is being treated as a severe issue that requires as much attention and latitude as broken bones and torn ligaments. This finding and admission by the nation’s biggest organized sporting league is another step in the direction of care being taken to concussions and neurocognitive disease. The NFL is not the only sport where concussions are prevalent, but their example will be a striking point for continued research, attention, and prevention of brain-related injuries.