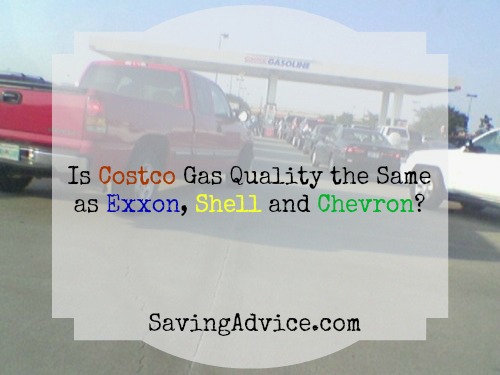 Everyone loves Costco, right? They treat their employees much better than other businesses, and they have competitive prices on a wide variety of items. In fact, Costco is known for some of the lowest prices on gas and if you want to shop gas at Costco, get a $20 Costco Shop Card for that.

But what do these low prices mean when it comes to Costco gas quality?

Cheap Gas But What About Costco Gas Quality?

Costco gas prices positively cannot be beaten. Typically, this means that a company saves money by making a cheaper product. This can call into question the quality of Costco’s black gold.

When Costco is selling its gasoline for so much less than the competition, it’s natural to be skeptical and wonder if the quality is equal to brand-name gasoline such as Exxon, Shell, and Chevron. Most people want to know if Costco gas is good quality fuel, or if it might cause long-term damage to their fuel system.

First, it’s important to note that the government sets fairly stringent standards for all gasoline sold in the United States. When it comes to octane level and other specific gasoline characteristics, all gas is basically the same. The difference between the fuel that you buy at branded gas stations comes down to the detergents that are added to the gas.

Even with detergents, the government sets standards. The federal government has required since 1995 that all gasoline sold in the U.S. must contain a certain amount of detergent additives. These additives are Environmental Protection Agency (EPA) approved, and the amount of detergent which must be added to keep vehicle engines free from deposits is regulated. Costco gasoline meets all these requirements, despite being so much cheaper than surrounding stations. Just because you are saving money, that does not mean that they have skimped out, or skirted any regulations.

Is Costco Gas As Good As the Competitors?

So, Costco meets the minimum requirements, but is it still as good as other brand-name gasoline? A number of automakers made the decision that the U.S. government additive requirement wasn’t high enough for many cars. As a result, they developed a “Top Tier” standard. In order to meet the “Top Tier” designation, the fuel sold at the gas station must meet additive requirements higher than required by the U.S. government. Costco fuel meets this top-tier standard, so that just goes to show the value that you are getting.

While Costco’s gas isn’t the same as the other brands, that does not make it a lesser product. After all, if it was the same exact gas, Costco wouldn’t be able to set itself apart. Costco gasoline is practically equal to any other major brand gasoline. You should not notice any difference when filling up your vehicle at Costco as you would with any other brand. The only difference you should notice is a much lighter hit to the wallet.

Get Better Gas Quality and Save Money

If you aren’t sure that Costco gasoline is as good as another major brand’s, try this “gas hack” to save money. In most areas of the country, you can fill up at the Costco gas station, plus add quality fuel injector cleaner

In the end, there is nothing to suggest that Costco brand fuel is inferior to any other brands of gasoline. Don’t let the price alone dissuade you from filling up there, but we won’t judge if the long lines drive you away.

Do you fill up at Costco gas stations? What do you think about the gas quality?

Also, check out our articles for Target.