Once you pop open that beer, the automatic reaction is to throw away the beer cap. Before you go and do that, consider the many ways that the beer cap can be reused or appropriated in a new way instead of heading to the dump. There are many ways that it can be used, and maybe one (or more) will tickle your fancy so that you decide to save them instead of throwing them away. below you’ll find a variety of ways that you can reuse beer bottle caps to give them a new life. 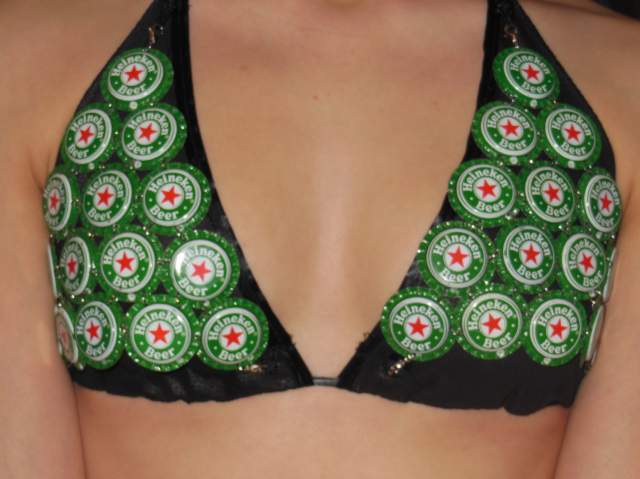 You know that someone that who has been drinking a lot of beer would think that this would be a good idea, so someone actually made one -- a beer cap bikini top. While I'm not sure that anyone would actually wear one of these, it could be a great gag gift of something sexy for a significant other to wear if their partner loved a certain beer. if nothing else, it would be a project that friends and family would certainly talk a lot about... 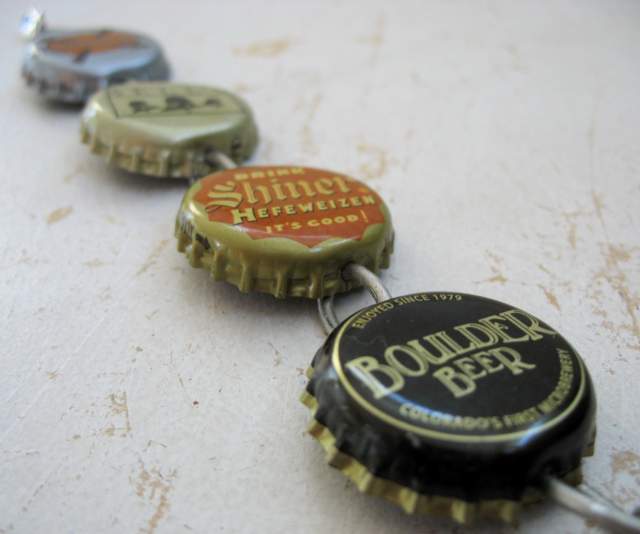 If you are looking for a project to convert beer caps into something you can wear without a lot of work, the beer cap bracelet might be exactly the project you're looking for.Punch a couple of hole on each side of the beer caps, loop them together with wire and a bracelet clip on the ends and you have yourself a reminder of the favorite beers you have been drinking. 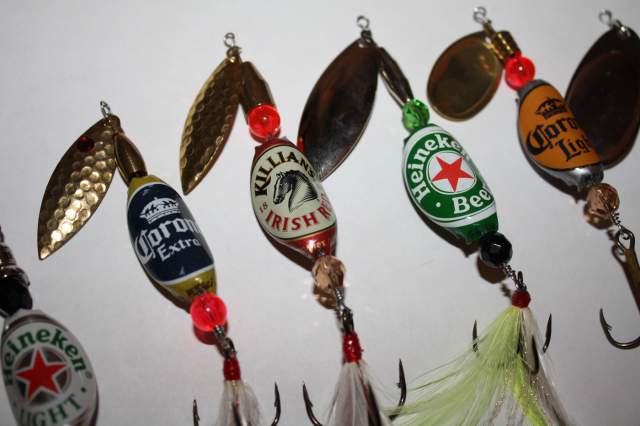 If you love beer and you love fishing, there's a perfect way to upcycle your beer caps to compliment both loves. Instead of throwing your beer caps away when you pop open a cold one, save the cap so that you can use it to catch a fish down the line (pun intended). Making beer cap fishing lures is not nearly as difficult as it might first appear, and that ice-cold one might put dinner on the plate. 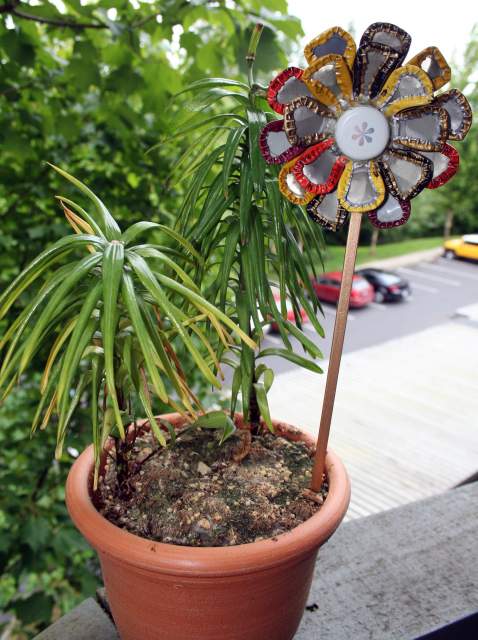 For those wishing to do a bit of outdoor art, beer bottle caps can be turned into garden ornament flower (tutorial). It does take a bit of bending and gluing, but not nearly as difficult as a lot of the other beer cap art projects out there. 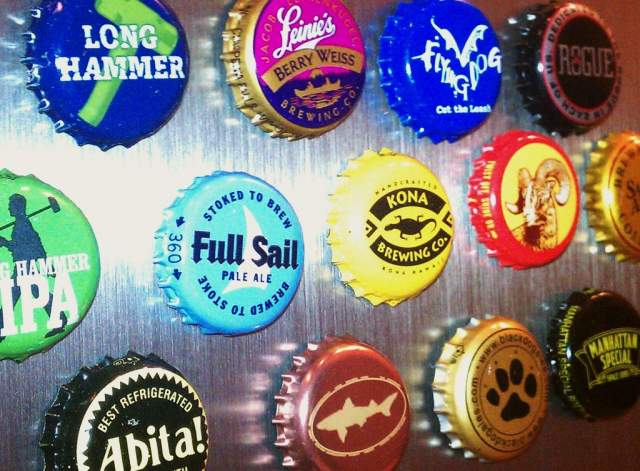 An easy way to use beer bottle caps rather than throw them away is to make them into magnets for your refrigerator or any other place that you use magnets in your house. You can purchase inexpensive round magnets from any craft store which should fit perfectly inside the beer bottle cap. Simply glue the magnet to the inside of the beer cap and you have a wonderful and colorful magnet for your refrigerator door. If you know somebody who likes certain types of beers, you can do the same thing and create a wonderful and inexpensive gift by creating a variety of different beer bottle cap magnets. 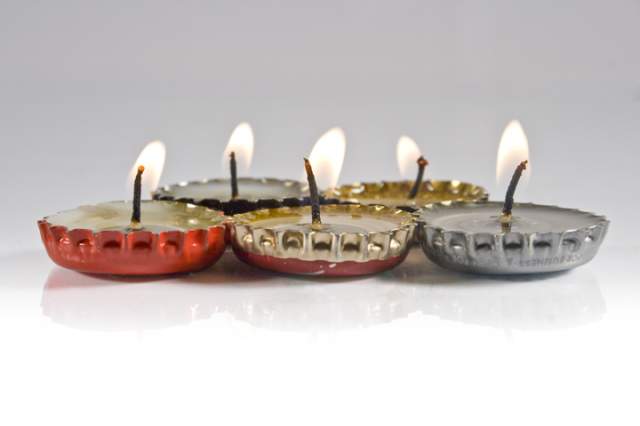 Beer bottle caps can be turned into mini candles. All you need are some old caps, candle wax, wicks and an aluminum lined baking sheet and you'll have an assortment of beer cap candles ready to use in no time. 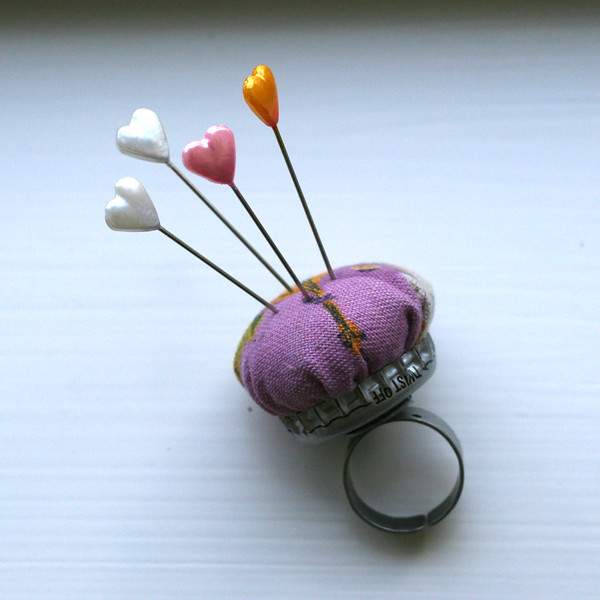 For those who enjoy sewing, a good craft project for any stray bottle caps is creating a beer cap pin cushion ring. The entire process is relatively simple (tutorial) and kids could probably pull it off as well. 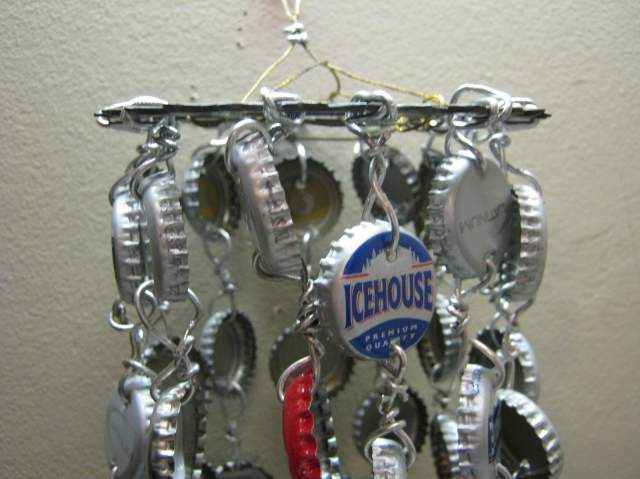 If you have a lot of beer caps that you need to use for something, one way to do so would be by creating a beer cap windchime (tutorial). Adding other random pieces of metal that might otherwise go into the trash is also perfectly acceptable. 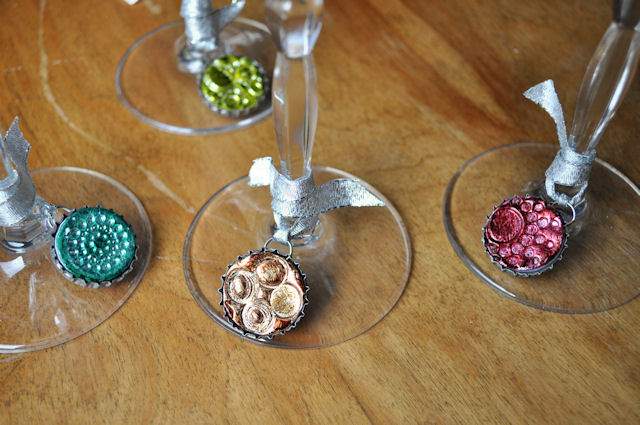 Photo Credit: This heart of Mine Blog

If you are having a party or large get together and you would like to not run out of cups, one of the best steps that you can take is to let everyone mark their wine glasses as their own (or whatever other glasses you are using). Using different beer bottle caps is an excellent way to do this. Simply make a hole in the beer cap and attach to the cup with wire or thread. if the party is a little more upscale, you can create much nicer beer caps (tutorial) that would fit for any occasion. 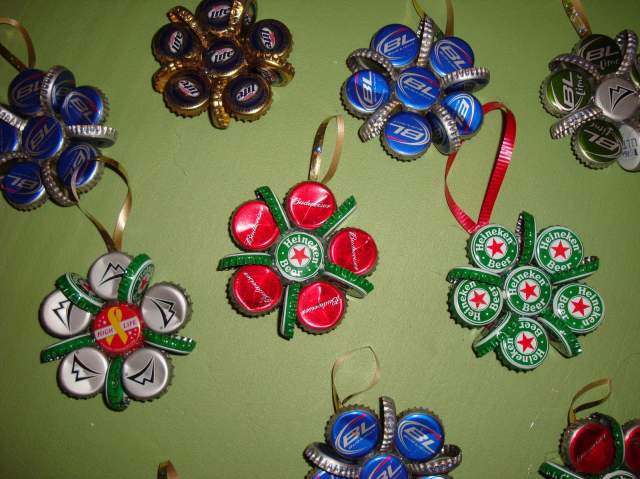 If you have a friend or relative with a favorite beer or if you simply want to create a gift that is sure to get some smiles, make a beer cap Christmas ornament. If you have a variety of beer caps, a hot glue gun, and some ribbon, you're in business and can create a multitude of different ornaments that are sure to cause some conversation.

You could contribute to this article if you were logged in.