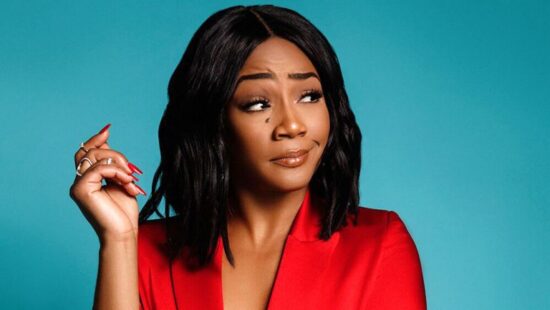 Tiffany Haddish is well known for her unconventional Hollywood frugality. Although she’s “made it,” Haddish doesn’t shy away from wearing the same dress twice or saving a dollar where she can. Up until recently, she’s been a traveling standup comedian. While she still does standup, her film career is beginning to take off. So, what is Tiffany Haddish’s net worth?

Haddish was born in Los Angeles on December 3, 1979. Her father was a refugee from Eritrea and her mother was a small business owner. At the age of three, Haddish’s father left, and her mother remarried and went on to have four more children.

In 1988, when she was just nine years old, her stepfather tampered with the brakes on her mother’s car, in an attempt to harm Haddish, her siblings, and mother. However, the kids decided to stay home that day, and her mother had an accident which caused severe brain damage. The brain damage may have also triggered her mother’s schizophrenia.

At this point, Haddish became the primary caregiver for her family at the age of nine. By the time she was turning 12, she and her siblings were placed into foster care. It was during this time she began to use comedy to cope with what was going on in her life. After three years of being in foster care, she and her siblings were reunited under the care of their grandmother.

She graduated from El Camino Real High School in Woodland Hills where she was the school mascot. Around this time, Haddish has stated that she was also sexually assaulted by a police cadet, making it hard to maintain relationships with men. In 1997, she attended the Laugh Factory Comedy Camp, continuing to cope with life through comedy. She has mentioned that in many of her sets she includes real-life experiences. The stage provides a “safe space” for her.

After graduating high school, she didn’t hop right on stage or on-screen. She held a number of jobs, and sometimes more than one at a time. Up until her “big break,” she’s had it pretty rough financially. She even lived in-and-out of her car during her 20s.

Haddish’s Career and Her ‘Big Break’

Her first break into comedy was a competition called Bill Bellamy’s Who’s Got Jokes? After being recognized in the competition, Haddish went on to make guest appearances on shows like Chelsea Lately, My Name Is Earl, It’s Always Sunny in Philadelphia, New Girl, and The Underground. She was also featured on Def Comedy Jam. She also had small roles in films such as Meet the Spartans and Janky Promoters early in her career.

In 2013, she scored a recurring role on Real Husbands of Hollywood. The following year Haddish was cast in the OWN series If Loving You Is Wrong, a soap opera. However, she left after just one season to take on the role of Nekeisha in The Carmichael Show, where she stayed for three seasons.

She continued to seek roles in film and co-starred in Keanu alongside Jordan Peele and Keegan-Michael Key. In 2017, she landed her biggest role yet: Girls Trip. This film was a huge deal for Haddish and grossed $140 million worldwide and received positive reviews. It was undoubtedly Haddish’s breakout film.

Since then, she has had a comedy special on Showtime, Tiffany Haddish: She Ready! From the Hood to Hollywood, which was received well. Haddish also co-hosted the BET game show Face Value and in November 2017, she became the first black female standup comedian to host Saturday Night Live.

In December of 2017, her memoir, The Last Black Unicorn, was released and debuted at number 15 on The New York Times best-seller list. She went on a short tour to promote her book and then returned to acting. Currently, she stars opposite Tracy Morgan in the sitcom The Last O.G.

She is starring in the 2018 comedy Night School alongside Kevin Hart, premiering in theaters on September 28. Haddish is also the lead in Limited Partners, another comedy slated for the big screen in fall 2018.

She has signed a first-look deal with HBO and will voice one of the main characters in the Netflix original Tuca & Bertie. She is also slated to voice Queen Watevra Wa-Nabi in The Lego Movie 2: The Second Part. Not to mention her upcoming roles in The Kitchen, The Temp (she’ll serve as executive producer), and The Oath.

It seems as though Haddish’s career has blown up overnight. What has this wild success done for her overall wealth?

Right now, Tiffany Haddish’s net worth sits at a modest $2 million. However, Haddish has made it clear she doesn’t have $2 million in the bank. She claimed on SNL she “ain’t seen this money. Where is this $2 million? What do I gotta do to get this $2 million?”

And that is largely true. Since Haddish has reached fame, almost every dime she has made has gone back into helping her mother and ill grandmother. Her mother, who has suffered since the car accident in Haddish’s adolescence, is finally able to get the psychological help she needs with the help of her daughter. She has also hired a food delivery service that sends her mother and grandmother fresh, organic meals three times a day (about $500 a week).

“I’m mostly taking care of my family right now,” Haddish said of how she’s spending her new-found riches. “Literally all my money goes into my grandmother and my mother. I got a two-bedroom apartment and moved my sister in so she could be monitoring [our mom]. I got nurses for my mom. My grandma bumped her head and had to have her brain drained, and she’s dealing with Alzheimer’s.”

Haddish needs to continue landing deals to be able to expand her net worth and keep up the care she’s set up for her family. She has always been extremely upfront about her earnings. For her appearance on the Disney Channel show That’s So Raven, Haddish only made $795. Although steadily increasing in the past year, she’s yet to see that big pay day. However, the Netflix comedy special slated to debut in late 2019 will garner the rising star around $800,000.

That doesn’t mean she’s about to be irresponsible with her money though. As mentioned previously, Haddish is well-known for recycling her $4,000 Alexander McQueen dress at multiple award shows and occasions.

She is also an endorser for Groupon and in early 2018 she appeared in a Superbowl ad for the company. After giving a candid review of the company, Groupon realized Haddish would be the perfect endorser. In addition to being a spokesperson for the company, Groupon has added an exclusive section of the site devoted to her favorite deals. The company also added an undisclosed amount of Groupon bucks into her account.

There is no doubt Haddish has come a long way from sleeping in her car and borrowing money. She is having a spectacular year and seems to be setting herself up for even bigger moves in 2019. Don’t expect to see Tiffany Haddish’s net worth or career die off any time soon.

Readers, what do you think about Haddish’s backstory and her incredible wealth?