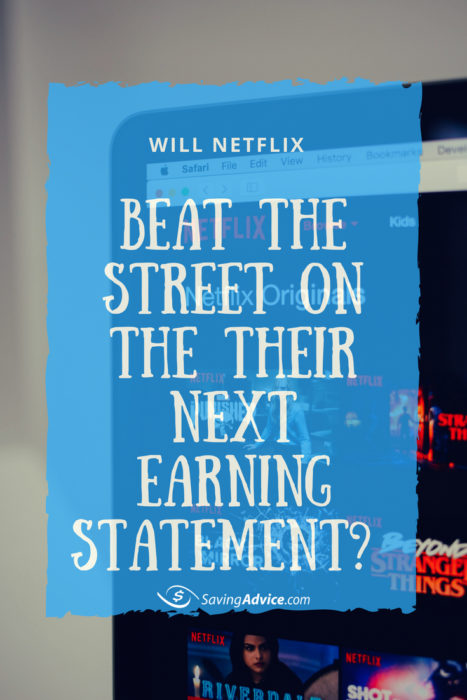 This month, Netflix earnings statement  for Q2 2018 will be  released. Many investors and analysts expect the company to share positive news, especially after their strong performance during the previous two quarters.

Netflix is scheduled to make its next earnings announcement, reflecting Q2 performance, on July 16, 2018. Analysts forecast earnings per share (EPS) of $0.80. But the big question is: will Netflix beat everyone’s expectations?

While it’s impossible to say for certain, signs are positive that Netflix will exceed expectations. If you’re wondering if Netflix will beat the street on their next earnings statement, here are some clues that they might.

The company thought their first quarter of 2018 was going to be strong, estimating growth of 6.35 million new subscribers. Instead, Netflix saw 7.41 million net new members sign up for the service, significantly beating their expectations.

A Reputation for Customer Satisfaction

Long-term Netflix users have shouldered the burden of multiple price hikes, including an increase in October 2017 for everything but the entry-level tier. However, this hasn’t notably impacted subscriber interest in the service or deterred new customers, even if small dips in new customer acquisition occurred right after the price bump.

By and large, customers appear to feel that Netflix provides them with enough value for the money. Plus, conceptually, the occasional $1 to $2 per month price bump doesn’t seem dramatic.

Customer satisfaction with the service is obviously high. Otherwise, the price hikes would harm Netflix’s numbers. Additionally, since Netflix is creating its own movies and television programs, users get access to something that isn’t available elsewhere.

As the price increases went into effect, profit margins grew, something that typically leaves a smile on the face of shareholders.

Netflix is reportedly testing new service tiers, something that could bolster earnings. Some of the current options would change in the proposed pricing structure. Both the Standard and Premium plans would come with fewer simultaneous streams in the packages, falling to one and two instead of the two and four, respectively. A new tier, labeled Ultra, would allow four simultaneous streams in up to 4K resolution.

At this time, testing is taking place in Europe. While Netflix may not pursue these options, it’s important to note that, even though two tiers receive fewer services, the price didn’t go down during the tests.

However, decreasing the number of simultaneous streams could create opportunities for additional revenue. First, households that access their accounts on several screens at the same time may need to upgrade. This increases the price of their plan, potentially raising revenue for the company.

Though this test likely doesn’t impact Q2, it could bolster the company in Q3. Additionally, the test alone may increase investor interest, something that may drive stock prices up.

Will Netflix Beat the Street on Their Next Earning Statement?

While it is impossible to know for certain whether Netflix will beat expectations, there is a strong chance that they will. The company has been posting excellent numbers throughout 2018, experiencing notable growth.

Additionally, while the Ultra tier is just a test, it could suggest the company is confident in its position. If subscriber numbers were slipping, reducing the services that come with existing tiers and creating a new one might not be a smart move. Since they are considering the pricing and service shift, Netflix likely feels customers would go along with the change.

If one had to make a guess as to whether Netflix will exceed expectations, the smart money would be on “yes.” However, predictions for the company’s performance were incredibly positive, so even if Netflix only met expectations, that’s still great news for shareholders.

Do you think  the Netflix earnings statement will show once again that they will beat the street? Tell us your thoughts in the comments below.

Looking for more great articles? Here are a few to get you started: It’s such an important question that is asked again and again: “How much money do I need to retire?” There are over 40,000 searches for this phrase (or some derivation of it) on Google every month. People are desperate to know if they can retire when they want and if they will outlive their money.

How To Answer The Question

There is obviously no simple answer for everybody. The answer for each person begins with “It depends.” It depends on when they plan on retiring, how much they will spend in retirement, and their other sources of income. It also depends on their life expectancy. I have written previously on a similar topic that looks at what it takes to retire early (at age 55).

I’ve also written about ways to get to your retirement number, which starts by maxing out contributions to 401(k) plans if you have that option. Today we want to look at how much money one should have in order to retire comfortably and how to piece the numbers together.

There are a lot of variables that go into the final answer to our question at hand. No human can possibly calculate all of this in their head, which is why it’s great to have software to do this for us. I used the WealthTrace Retirement Planner to run our numbers for this case study. I asked the question, if a couple wants to retire at age 62, how much money do they really need?

First, let’s get our assumptions out of the way. I assumed we are looking at a married couple that is currently 55 years old. Here are my other assumptions: We now need to ask, what do we really mean when we say “this is how much it will take.” Do we mean, they will end their plan with $1 in the bank? Clearly that is a risky proposition. We want them to have a safety buffer, so I will start with the goal of this couple ending their plan (when they have both passed away) with at least $200,000 left over.

Using this as our goal I found that this couple needs $745,000 when they retire. Using the assumptions I outlined above, they will never run out of money and they will have $200,000 at the end of their plan to pass on to their heirs. Below you can see their investment balances over time: What If Stocks Don’t Do Well?

This is a question that all of us should be asking. If stocks do not return 7% per year, what happens to this couple in retirement? We certainly shouldn’t bank on 7% average returns. So let’s run a few scenarios where rates of return are worse than this. I looked at how much money they would need at retirement given 6% returns, 5% returns, and 4% returns for stocks. Here is what I found: Our rate of return assumptions are very important when we run this type of analysis. That’s why I always recommend being somewhat conservative with return assumptions. Don’t plug in 9% for your stock returns every year and think your results will pan out. That is dangerous and can lead to bad decisions.

Each person and couple are very different. We cannot apply a blanket answer to the question “How much do I need to retire?”. But we can make general statements and look at each person’s individual situation to come up with a good number. One thing is for certain: It’s better to run the numbers than making a guess. Retirement plans are too important to leave to chance.