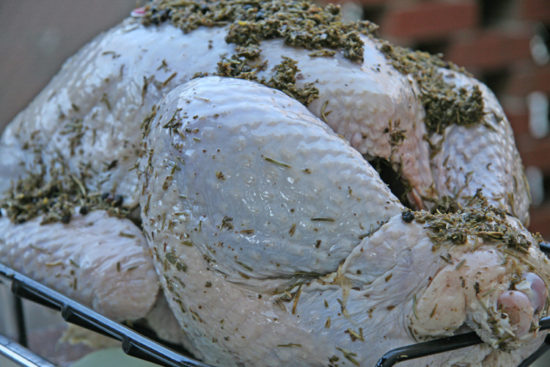 Federal health officials reported the first death linked to a salmonella outbreak considered to be linked to raw turkey. With Thanksgiving approaching, many people will be buying turkeys. Here’s what you need to know about the salmonella outbreak and how it may impact your Turkey Day celebration.

The Centers for Disease Control and Prevention reported the death on Thursday morning. The individual was in California but no other immediate details have been made public. The California Department of Public Health has not yet responded to inquiries about the death either.

Outside of this tragic loss, 164 other people have fallen ill with salmonella poisoning across 35 states since last November. That’s right – the salmonella outbreak has been occurring over the past year, with the most recent case having been reported on October 20.

At this time, no products have been recalled. No single supplier has been identified as the source of the outbreak. The only place the salmonella has been found is in live turkeys, ground turkey, turkey patties, and raw turkey pet food.

CDC officials also haven’t announced any recommendation to avoid turkey. However, the agency points out that the outbreak is widespread and ongoing. “We are still seeing new illnesses being reported on a weekly basis,” Colin Basler, an epidemiologist with the CDC, pointed out.

There is generally some lag time in between when a person falls ill and when the sickness gets reported. So, it is possible even more people have been impacted.

Before you call off your turkey dinner, you don’t have anything to worry about! CDC officials simply reminded everyone to properly cook and handle your Thanksgiving turkey. The internal temperature of your turkey needs to reach 165°F before it can be safely consumed.  You should also wash your hands and counters after raw turkey meat has touched them.

Salmonella isn’t only found in raw meat though. In fact, it can be found in a variety of different foods. Salmonella causes about 1.2 million illnesses each year and the illness is more likely to be deadly in the elderly and infants. According to the CDC, symptoms include diarrhea, fever, and abdominal cramps. Salmonella poisoning can last up to seven days. There is another food recall, this one for chia powder rather than beef. If you consume chia powder, you might want to check your shelves to make sure you don’t have any brands recalled due to possible salmonella poisoning. The Centers for Disease Control and Prevention (CDC) says 21 people from 12 different states have gotten sick due to consumption of chia powder, an ingredient which is often added to such foods as smoothies for its health benefits. Of the 21 people sickened, two have been hospitalized due to the illness. Nobody has died as a result of the outbreak thus far.

The following product brands have been part of the recall:

The products being recalled were available in a wide variety of retail outlets across the US and online. Since chia powder has a long shelf life, the CDC wants people to look in their pantries to make sure they don’t still have products which are affected by the recall.

If you do find a product, you should either throw it away (place it into a sealed plastic bag, then place in a covered trash can to prevent other people or animals from eating it), or return it to the store where you purchased it. Even if the product has been partially consumed without any harm, the rest of it should still be disposed of and not consumed assuming it’s safe. Products contaminated salmonella will usually look and smell normal, so you won’t be able to tell yourself by looking for an strange smell or the product looking spoiled.

Those who do get salmonella poisoning will usually start having abdominal cramps, diarrhea and a fever approximately 12 to 72 hours after infection. The symptoms will usually last 4 to 7 days, and most people are able to recover from it without any special medical treatment. Those who can be affected more severely and can even cause death are young children, pregnant women, the elderly and people who have weakened immune systems.

In addition to the CDC, the Canadian Food Inspection Agency has also sent out a recall warning, with list of affected brands which includes Organic Traditions, Back 2 the Garden and Pete’s Gluten Free brands.