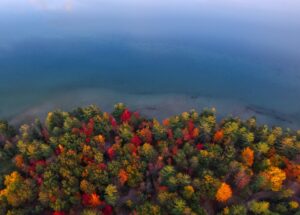 Figuring out where you should retire isn’t always easy. The city you choose plays a significant role in your quality of life, as well as how long your retirement savings lasts. That’s why choosing the right place is so vital. While many people may not initially consider Michigan, that doesn’t mean it shouldn’t be on your list. The state has a lot to offer and may be more affordable than some alternatives. If you are wondering what it takes to retire well in Michigan, here’s what you need to know.

When you’re deciding where to retire, looking at the state’s cost of living metrics is a good idea. These scores give you an idea of the overall affordability of a state in comparison to the national average.

Michigan comes in with an overall cost of living score of 90.9, meaning it is a bit cheaper to live in the Great Lakes State than many other locations. When it comes to category scores, Michigan is below 100 in all but one category.

For groceries and utilities, Michigan comes in at 92.0 and 99.7, respectively. For healthcare, the Great Lakes State sits at 95.4.

When it comes to housing, Michigan’s cost of living score is 76.0, which is impressive. Now, some may assume that means there is a housing quality issue, but that isn’t necessarily the case. Instead, it generally means that if there were two carbon-copy properties, one in Michigan and one in a state with a higher score, the house simply costs less in the Great Lakes State.

The only score that is above 100 is transportation. It comes in at 104.3. That means vehicle insurance, maintenance, licensing, registration, and similar expenses may be higher here. Additionally, it could signal that certain transit services, like taxis or bus fares, might be higher, too.

Before you choose a place to retire, it’s smart to review the tax implications associated with a potential destination. How much you owe in taxes impacts how far your retirement savings will do, something that may be especially relevant to retirees with tight budgets.

Michigan does have a state income tax. Unlike the federal rates, the Great Lakes State doesn’t use a bracket system. Instead, the state’s income tax rate is a flat 4.25 percent, and everyone has access to a personal exemption of $4,750.

Additionally, Social Security is tax-exempt. Military pensions and Railroad benefits are also not subject to taxation. This can be a boon for retirees who predominately rely on those sources for income.

However, other forms of retirement income are taxed. This includes most other defined benefit pensions, 401(k)s, IRAs, 403(b)s, and more.

Michigan also has a sales tax. Cities and counties can’t impose additional taxes, so it is a flat rate that applies across the entire state. It is set at 6 percent for most purchases, though certain products or services may have alternative rates. For example, electricity and gas utilities are 4 percent, instead.

When it comes to property taxes, Michigan’s standard rates are a bit higher than the national average. However, seniors do qualify for an exemption that could help make property taxes more affordable. The Homestead Property Tax Credit reduces their burden by up to 100 percent of their tax amount that exceeds 3.5 percent of their income, up to $1,200. Precisely how much relief you get will depend on your income level, as a result.

When it comes to part-time job opportunities, Michigan typically has a reasonable amount to offer. However, the state was hit hard by COVID-19 and, while it is recovering, this could make things challenging for the next several months or longer.

Initially, unemployment skyrocketed in the Great Lakes State. In April 2020, Michigan’s rate hit 24 percent, which was nearly 10 percentage points above the national average for that time of 14.7 percent.

However, as of September 2020, the rate has calmed. Michigan is still above the national average of 7.9 percent. But, with the Great Lakes State coming in at 8.5 percent, it’s significantly closer to the average than it once was.

It is important to note that the COVID-19 situation is still highly fluid. Many states are beginning to see signs of a resurgence, something that may be an issue throughout the fall and winter, and potentially longer. As a result, retirees may have trouble securing opportunities for at least a little while, depending on the kind of work they want and their overall skill set.

Best Cities for Retirees in Michigan

The city you select impacts your quality of life, which is why it’s critical to focus on options that best meet the needs of retirees. That way, you can have your ideal lifestyle, making your golden years more enjoyable.

If you aren’t sure where you should head in Michigan, Farmington needs to be on your list. It isn’t necessarily a common destination for seniors, but it brings a lot to the table. You’ll have quick access to medical facilities, for one. For another, Farmington is a favorite shopping destination, and it’s Saturday farmers’ market shouldn’t be missed.

Grosse Pointe is another solid choice. It’s near Detroit, so you can easily reach the city, but it is along the shores of Lake St. Clair, making it great for those who appreciate lakeside living. It also has plenty of amenities.

Rochester is also near Detroit and is home to a fantastic Christmas Parade. Brighton – which is nestled on the shore of Brighton Lake – could also be a great choice if you want to be close to Detroit.

Traverse City is a popular tourist destination, but it can work well for retirees, too. Its arts scene is exceptional, and there’s even an opera house that hosts a range of performances. Plus, the Cherry Festival is a fun annual event.

How Much Money You Need to Retire Well in Michigan

Since Michigan isn’t a high-cost state, you don’t need as much to retire well in the Great Lakes State. While the city you select will impact overall affordability, by focusing on areas that offer a reasonable amount of amenities with a smaller price tag, retiring in Michigan may be more comfortable than certain other locations.

Generally, if you have access to $57,114 per year, you should be able to retire well in Michigan. Covering your needs usually won’t be an issue, and you may be able to cover a reasonable number of wants, too. If your goal is to enjoy your golden years with limited financial stress, that amount could be an appropriate target for making that happen.

Do you have any other tips that can help someone retire well in Michigan? Share your thoughts in the comments below.