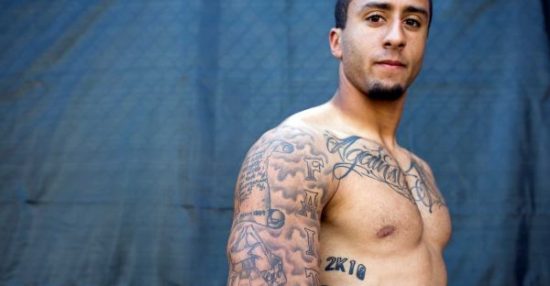 Former San Francisco 49ers quarterback Colin Kaepernick has been grabbing national attention but not for his football-yielding abilities. In 2016, Kaepernick decided to remain seated during the national anthem. He stated that he would not stand up and honor a country that was suppressing the people of his race. Now, Nike has named Kaepernick the face of its latest ad campaign. How will the endorsement deal impact Colin Kaepernick’s net worth?

Kaepernick was born in Milwaukee, Wisconsin, to Heidi Russo. He was placed for adoption with Rick and Teresa Kaepernick. Kaepernick became the youngest of the couple’s three children. He lived in Fond du Lac, Wisconsin, until age four and attended grade school in Turlock, California.

He first began playing football at the age of eight as a defensive end and punter and became the team’s starting quarterback at nine. In high school, he was a three-sport star and actually passed up a promising baseball career as a pitcher to continue playing football.

However, he achieved most of his accolades in high school through playing baseball. He was offered several scholarship offers for baseball but he wanted to play football in college. Several colleges expressed interest in Kaepernick but he had trouble landing a football scholarship. That is until the University of Nevada’s head coach Chris Ault decided to offer him a scholarship.

Kaepernick was drafted in the 43rd round of the Major League Baseball draft in 2009. However, Kaepernick did not sign with the Chicago Cubs. Instead, he decided to continue his football career at the University of Nevada.

In 2011, he was drafted into the National Football League and became the 36th pick for the San Francisco 49ers. His coach said he had the potential to be one of the best quarterbacks in the league. In fact, he signed some of the largest contracts in 49ers history during his time with the team, which significantly helped increase Colin Kaepernick’s net worth.

That is all seemingly over now. After just a short time in the NFL, Kaepernick has become a national figure, but it isn’t because of his athletic talent. In 2016, he came into the spotlight for starting a controversial protest. Kaepernick chose to kneel during the national anthem as a protest to the racial injustice occurring throughout the U.S.

These actions have prompted many negative responses. After the 2016 season, he opted out of his contract with the 49ers, making him a free agent. No team has picked him up since. In 2017, he filed a grievance with the NFL, claiming the organization was colluding to not hire him.

Kneeling may have been one of the best things for Kaepernick’s career though. Although he had some athletic talent on the field, kneeling has brought him more recognition and more cash than playing ever did. In fact, it even helped him become the new face of Nike.

Currently, Colin Kaepernick’s net worth sits around $22 million. Even though many people have projected he’d lose a ton of money from the “national anthem controversy,” he’s actually been in the spotlight more than ever.

Kaepernick decided to re-sign with the 49ers in 2014. The contract he signed was worth $126 million. He received a signing bonus of $12.3 million, in addition to earning a regular annual salary with the team ($10.4 million in 2015). However, it was later revealed that Kaepernick only received about 31% of his $126 million contract before leaving the team.

How Much is the Nike Deal Worth?


The terms of the deal between Nike and Kaepernick have not yet been disclosed to the public. However, it is safe to say that Kaepernick has already benefited from the deal. He has had increased publicity and stands to make millions. In fact, Nike is known to pay its endorsers extremely well.

Four athletes are featured in the “Just Do It” campaign alongside Kaepernick: Odell Beckham Jr., Shaquem Griffin, Le Bron James, and Serena Williams. Lebron’s associates revealed that his lifetime deal with Nike was worth more than $1 billion alone. So, it is safe to say Kaepernick will make a pretty penny from his deal as well.

Although Nike initially fell 3% in the market after signing Kaepernick, and many people were up in arms about having him be the face of the company, Nike stock has since recovered. In fact, the stock is currently at a 30-day high.

It is not yet clear whether Kaepernick will ever get back on the field, where he’s made most of his $22 million fortune. Because of this and his overall lack of endorsement deals (outside of Nike), it isn’t really clear what the future of Colin Kaepernick’s net worth will be.

What do you think about Nike’s decision to sign Kaepernick?