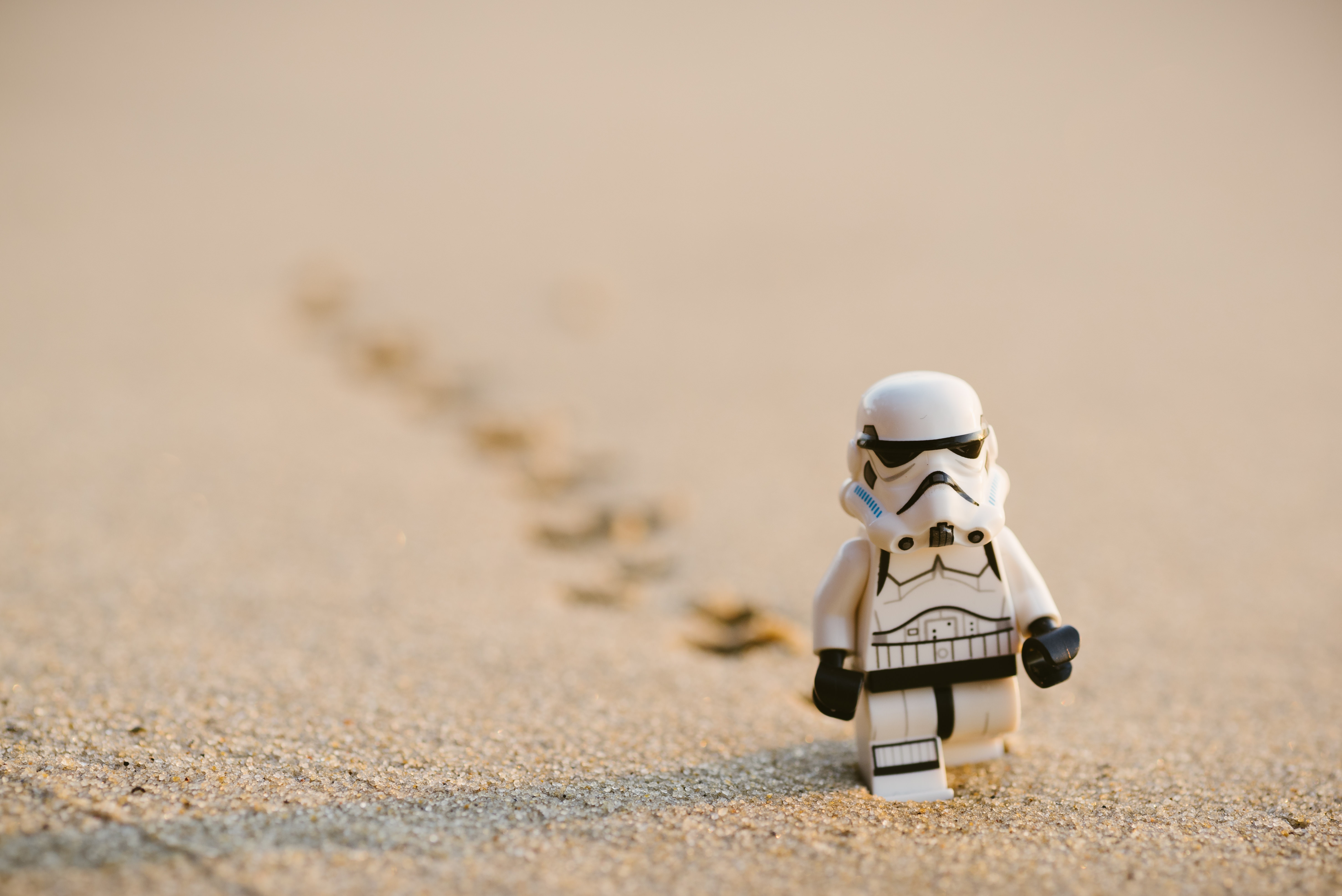 It began as the punniest holiday ever but quickly grew into an earnest (if somewhat random) celebration of the long-running (and still going) Star Wars franchise.

Although the first public use of the pun happened in 1979 (in a message of congratulations to Margaret Thatcher, of all people, on her May 4th assumption of office), the pun began spreading like wildfire among Star Wars fans in the early days of Facebook, and has since blossomed into the unofficial but widespread Star Wars celebration we enjoy every spring.

Here are seven items to help get you into the spirit of Star Wars Day.

From the beginning, the Star Wars saga was expanded in novels that fleshed out the universe and characters beyond the movies. (The very first such novel, Splinter of the Mind’s Eye by Alan Dean Foster, came out one year after the first Star Wars movie, and is still in print.)

This practice continues today, with books that expand the stories of the new and popular characters introduced by the recent movies for a new century of fans.

Cobalt Squadron ($11.99 hardcover/$1.99 Kindle) is a YA novel from best-selling author Elizabeth Wein, offering the adventures of Rose Tico, the beloved character played by popular newcomer Kelly Marie Tran, and her ill-fated sister Paige prior to the events of Star Wars: The Last Jedi.

The Clone Wars – The Lost Missions

There have been a number of animation tie-ins that have expanded the Star Wars saga over the years as well.

The series Star Wars: The Clone Wars takes place during the prequel trilogy of films (episodes I-III), with focus on the evolving relationship of Obi-Wan Kenobi and Anakin Skywalker. Produced by Lucasfilm, the series is in some ways more popular than the three movies from which it spun off.

Star Wars: The Clone Wars – The Lost Missions ($22.99 for Blu-ray) collects the thirteen episodes from the sixth and final season of the show.

One does not have to see the first five seasons to enjoy this set, which is acclaimed by fans of having the most engaging plotlines and finest action sequences of the series.

In 2015 Brand Finance listed Lego as the world’s most powerful brand.

This was a year after The Lego Movie was released, during a time when the popular construction block toy was integrating into other media.

That Lego should have a whole line of Star Wars toys is unsurprising, and this incredible kit for the popular droid BB-8 ($99.95) is one of its most popular products.

It comes with a small model of BB-8 and a display pedestal. At the current price, it’s the item for the real Star Wars and Lego enthusiast. And at 1,106 pieces to assemble, it may take you until May 4, 2019 to put the whole thing together.

The Porgs, the puffin-like creatures encountered on the planet Ahch-To in Star Wars: The Last Jedi, caused some controversy.

Though many were charmed by the absolutely adorable characters, some viewers thought that they were there strictly for the merchandising tie-in.

We’re in both camps: yes, the Porgs are toyetic and merchandiseable, and we are so glad they are.

The life-sized interactive Porg plush ($24.90) pictured here comes with three AA batteries, enabling it to wave its arms and make different Porg trills and sounds (Full disclosure: the writer and editor of this article spent a full half hour giggling at the sheer cuteness of this thing, and judging by the copious five-star reviews on Amazon, they’re not alone).

Casting an ominous but super-cool shadow across the original Star Wars trilogy, the world’s deadliest bounty hunter is on the prowl… and he’s coming to your desk.

Funko has created over 13,000 bobbleheads and other products out of characters from many pop culture franchises. So of course they would create a line of figures for Star Wars. It follows that you’d get figures of the most popular characters, which means that Funko would inevitably create a bobblehead of Boba Fett. A Bobble Fett, if you will.

Totaling 7.3 inches tall, the Funko Boba Fett POP ($9.54) is adorably bad-ass. He is armed and his clenched fist suggests he’s ready for action. And in case you have other figures who needs a little discipline, he’s removable from his pedestal to more freely spread the rule of the Empire across your desk or action figure shelf.

The Empire Strikes Back Soundtrack

Ask any of your friends to name a composer of film music, and it’s very likely that they’ll name John Williams.

There is simply no question that composer John Williams is one of the MVPs of the Star Wars movies. The original trilogy is unimaginable without Williams’ music; it’s hard to imagine anyone can’t hum the Star Wars theme if asked.

Williams’ score to The Empire Strikes Back ($9.49 MP3; $22.33 CD) might be his finest for the series (and the link takes you to the freshly remastered recording of the score conducted by the Maestro himself).

Kicking off with the ever-popular Star Wars theme (which you can play for that odd friend who can’t hum it from memory), the score goes through some of Williams’ most shaded and powerful tracks, including the bombastic “Imperial March.”

You can buy the whole album and take the musical journey, or pick up the individual MP3s, which means you too can set the “Imperial March” as your ringtone.

So some fans are saying this is really a Blade Runner umbrella and they may have a point. But why quibble when talking about something this practical and cool?

The entire shaft fires up like a light saber. And you can pick the light saber color of your favorite Star Wars characters, including the blue or green of Luke Skywalker, and even Mace Windu’s purple. Or go Imperial red, if you’re feeling villainous.

It even comes with a flashlight at the bottom of the base for added visibility, which can be extremely helpful when you drop your keys on a rainy night. But mainly we bet you’re going to make little light saber noises whenever you fire this thing up, which is absolutely your right.

Any of these items strike your fancy, readers? Is there some other Star Wars item you’re craving for May 4th? Tell us about it in the comments section beneath this post. Disney recently released announcements about who the cast for “Star Wars: Episode VIII” will be. Benicio del Toro is one of the slated cast members for the knew film. “Star Wars” is anticipated to be another Blockbuster hit by Disney and Benicio del Toro will be a member of the talented cast. How will that affect his net worth?

In late 2012, Disney bought Lucasfilm, the creators of “Star Wars.” Over the years, “Star Wars” has gained a huge fan base, so this was seemingly the best business move of the decade. Disney bought Lucasfilm and its subsidiaries for $4 billion. In return, George Lucas (founder of Lucasfilm) received 40 million shares of Disney, making him the second largest stakeholder in the company.

Episode VII was released in late 2015 and the company has decided to release a film every other year. It hopes to release an episode VIII and IX and go from there.

Toro, whose net worth is currently $45 million, has earned his money through acting for many years. The 48-year-old is the third Puerto Rican in history to have received an Academy Award. He has been in many major Hollywood films including “Guardians of the Galaxy,” “Thor” and “Sin City.” Now, with the actor’s name slated on “Episode VIII,” his net worth is likely to increase.

It seems “Star Wars” fans everywhere have waited for the release of Episode VII. Now, they will be awaiting the release date of Episode VIII. Episode VII, “The Force Awakens,” can be best described as a story about Han Solo. Well, Episode VIII will be a Luke Skywalker story. It is not yet known what part Benicio del Toro will play in the film, but it will probably be one of the most anticipated movies he’s ever been part of.

The film currently has a anticipated release date some time in 2017. Although the cast has been announced, no one is aware of what parts each person will be playing (outside of the cast from Episode VII). Each actor and actress will have the opportunity, however, to have a part in one of the most anticipated movies of that year. Each of them are likely to see an increase in net worth as well, just like Toro.