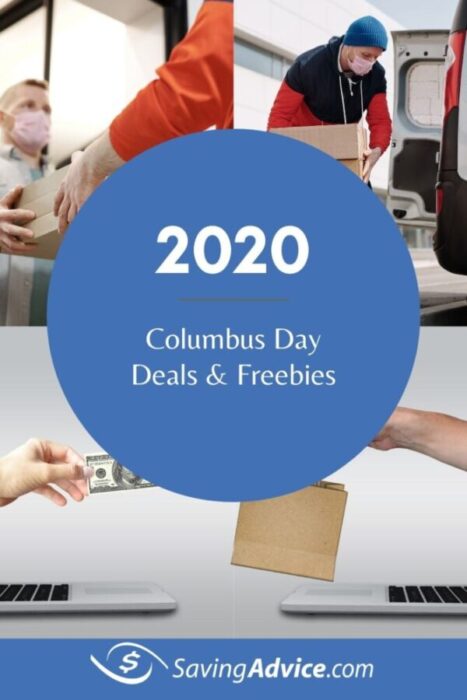 Columbus, or Indigenous Peoples’ Day, is the last shopping holiday before Black Friday. With that title comes the great responsibility of deals galore. Will it live up to its position this year amidst the pandemic? Here is a look at this year’s Columbus Day deals and freebies…

Although many people don’t recognize Columbus Day anymore, it still represents an opportunity for retailers to have a sale. This year’s Columbus Day deals are a little dialed down but good nonetheless.

One of the bigger items that typically go on sale around the holiday are vehicles. In 2020, that is no different. Some of the best deals include 0% financing on 2020 Toyota Camrys, Subaru Foresters, Mazda Miatas, Volkswagen Tiguans, Hyundai Sonatas, and Jeep Wranglers.

Many of the retailers offering deals this year are allowing them to be redeemed online and in-store. So, you’ll be able to order your discounted items for pickup, delivery, or browse in-store (with precaution, of course). Here are some of the best Columbus Day retail deals this year.

Freebies to Take Advantage Of

Look for free things to do in your town this weekend. There are plenty of outdoor events that allow for social distancing. If you live in San Francisco or a larger city, Google whether or not your city has a free virtually guided walking tour.

Some museums may also be free of charge over the holiday weekend. Research what events, attractions, and activities may be free for Columbus Day. Shopping wise, not many stores are handing out freebies. Be on the lookout for similar deals as to what has been available in the past.

There are also usually a number of free things happening in your state’s capitol. Check out some of these free things to do: Here’s a question you are bound to hear from your child if they happen to live in one of the cities where students have to go to school on Columbus Day, “If Columbus Day is a federal holiday, why do I have to go to school?” It’s actually a good question as there are many people who wonder why some schools are open while other schools are closed on Columbus Day. (The holiday is celebrated on Monday, October 13 in 2014, and the second Monday of October each year)

Columbus Day is one of those holidays which confuses a lot of people because what’s open and what’s closed aren’t necessarily consistent with other federal holidays. In most instances, when there is a federal holiday, not only do federal employees get the day off, but so do state and other public employees. For federal holidays like Veterans Day and Memorial Day, except for rare exceptions, all schools are closed. That’s not the case when it comes to Columbus Day, so it’s reasonable for people to wonder why this holiday is treated differently than other federal holidays on the local and state level.

Whether your school is open or closed on Columbus Day depends a lot on where you live. While most schools across the country still observe the second Monday in October as a holiday, more and more aren’t. The key reason here is they don’t have to. A federal holiday means that non-essential federal employees have the day off, but there is nothing in the law that says state and local government offices and workers get the same benefit. This is why you’ll find that some schools will have a regular day of classes on Columbus Day even though it’s a federal holiday.

In fact, there are several states which explicitly don’t recognize Columbus Day at all. These include Alaska, Hawaii, Oregon and South Dakota. Even this doesn’t necessarily determine whether or not schools will be open that day. For example, while Oregon doesn’t recognize the holiday at all, and all state and local government offices remain open on that day including schools. On the other hand, even though South Dakota doesn’t recognize Columbus Day, the state has renamed the day “Native American Day,” which is a state holiday, closing all the state government offices and schools.

It can get even more complex. While certain states celebrate the holiday, some local city governments within those states have replaced the holiday with another. For example, Berkeley (CA), Sebastopol (CA), Santa Cruz (CA), Dane County (WI), Minneapolis (MN) and Seattle (WA) have all replaced Columbus Day with Indigenous People’s Day.

To this end, the decision of whether a school district will keep their schools open or closed on Columbus Day varies with there being no set rule. For those wondering if your local schools will be open or closed for the day, the best action to take is to contact the school directly to find out the answer.