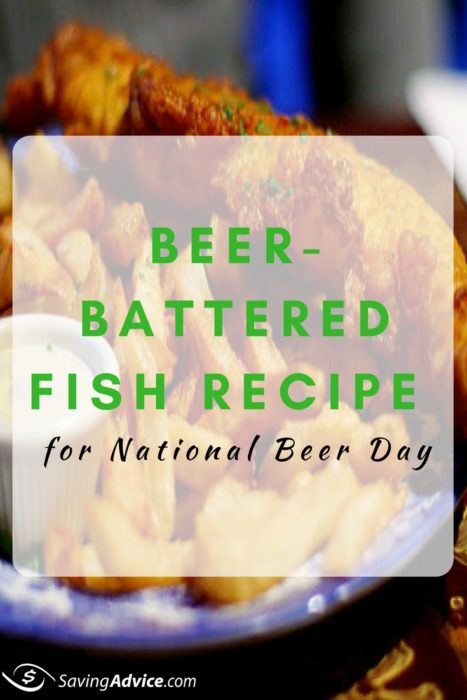 April 7 is National Beer Day — commemorating it isn’t just about drinking the beverage, but also including it in recipes. With that in mind, here comes a recipe for beer-battered fish.

It’s simple to make yet delicious to taste, and great for a weeknight dinner, munch on while watching Netflix, or even during snacks for game night.

Many of the ingredients can be found in your pantry so this is an affordable and easy dinner or snack to make. Another tip: Aside from cod fish fillets, you can also use other types of fish fillets like pollock, snapper or haddock. Serves eight people.

1. Heat oil in a deep fryer to 365 degrees F (185 degrees C).
2. Rinse fish fillets, pat dry, and season both sides with salt and pepper.
3. Combine flour, garlic powder, paprika, salt, and pepper into a bowl.
4. Stir egg into dry ingredients.
5. Gradually mix in one bottle of beer until a thin batter is formed.
6. Dip fish fillets into the batter. You should be able to see the fish through the batter after it has been dipped, then drop one at a time into hot oil.
7. Fry fish until both sides are golden brown.
8. Drain on paper towels, and serve warm.

Note: If you don’t have a deep fryer, making beer-battered fish in a deep frying pan will do. Adjust the amount of vegetable oil, just good enough to coat the fish fillets when cooking.

Optional dill tartar sauce: In a bowl, blend 3/4 cup mayonnaise with 3 tablespoons sweet pickle relish, one diced sour pickle and one tablespoon chopped dill. Season the tartar sauce with salt and pepper and serve cold. Makes about one cup.

Best served with thick-cut fries on the side.

Readers, please let us know what you think of this recipe after trying it out in your own kitchen. Also tell us what if anything you’re doing in honor of National Beer Day today. If you’re someone who constantly uses coupons, you’ve probably seen them for almost any food item you can find in a grocery store. However, there are plenty of items that rarely have coupons. They also happen to be the items that you are usually buying and paying full price for, like fresh produce or fish or meat by the pound. While coupons for these items are pretty rare, they do exist. In fact, there are different apps that may even help you find coupons for these items. Here are a couple of different food coupons that you might have been unaware of:

Milk is one of those items that is rarely on sale and that you can rarely find coupons for. Milk substitute products such as soy milk or almond milk often have coupons, but the same can’t be said of regular milk. However, every once in awhile a grocery store will have a coupon for milk. These are generally store coupons instead of manufacturer’s coupons, so you should keep your eye on store coupons instead of looking for coupons in Sunday paper.

Eggs might often be on sale at your grocery store or convenience store, but there is rarely a coupon for them. This is generally because there aren’t well known brands for eggs. Many of the eggs come from local or national farms, so it’s almost impossible to create a manufacturer’s coupon for such an item. But coupons for eggs have been known to exist and as with milk, they often come in the form of store coupons.

You can often find coupons for prepackaged meats such as chicken drumsticks or pork chops, but it’s rare to find coupons for meat from the butcher. However, searching online for meat coupons can sometimes land you coupons for a few dollars off meat by the pound. Additionally, you might also have better luck finding coupons for butcher stores or stores specializing in meats instead of meat coupons for your local grocery store.

Deli meat is another item that is often on sale at the grocery store, but something that rarely has printed coupons. Generally this is because many grocery stores stock different brands of deli meat. However, while you might be hard pressed to find coupons in your local papers or flyers, you can try searching online for coupons for your preferred brand of deli meat.

It’s rare to find coupons for fish that’s not frozen or prepackaged. Most grocery stores will have the rare special or discount on fish, but it’s very unusual to find a coupon for fish. Fish, along with items like fresh produce, usually come from local farm or distributors that don’t actually have coupons. However, even though there won’t be any manufacturer’s coupons, you might be able to find store coupons for fish or even coupons for larger fish markets.

Like many of the other items on this list, fresh vegetables usually do go on sale, but very rarely have coupons. However, sometimes you can find coupons on the internet, in grocery store flyers, or on the shelves and bins containing fresh vegetables. And while it should be noted that these coupons are few and far between, they do exist. You just have to be patient while you wait for them or search online for them.

Coupons for bakery items depend on the grocery store you shop at. Some grocery stores will have a constant flow of coupons for their bakery items while others will have coupons only around large holidays. So if you happen to be a huge fan of your local grocery store’s pies, cakes, or pastries, keep your eye out for coupons. You wouldn’t want to pass by an opportunity to get some money off these items, after all.