"Money is only useful when you get rid of it. It is like the odd card in Old Maid; the player who is finally left with it has lost." - Evelyn Waugh 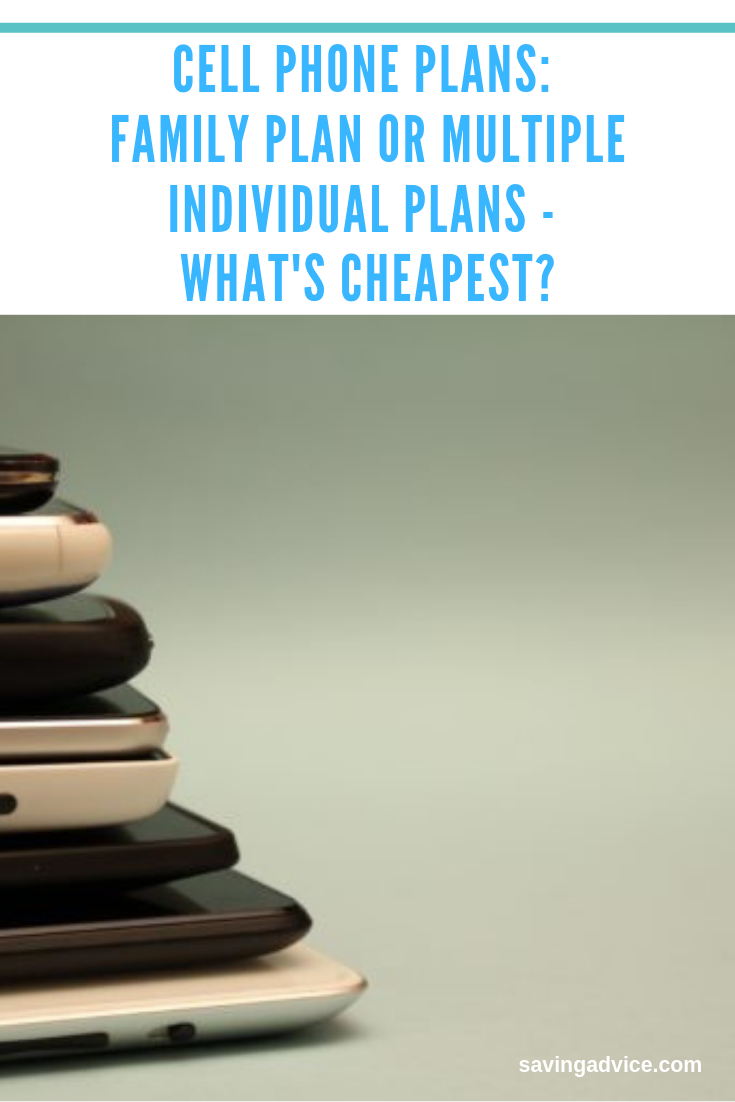 Trying to figure out the best cell phone plan is complicated, isn’t it? First, you have to choose the right company. Then you have to select the best plan. These days, that means you have to consider calls, texts, and Internet requirements. It’s hard enough to find the most affordable right for one phone. What about when you have a family? Should you automatically go with the family cell phone plan? Or is it sometimes cheaper to get multiple individual plans? It’s annoying to try to figure out what’s right for your family, but it’s well worth it if it saves you money.

Who Is Part of the Family Cell Phone Plan?

The first thing that you have to ask yourself is who would be part of the family cell phone plan if that’s the route that you went. This matters for two core reasons:

Who Is Going to Pay the Bill?

In most families, whoever gets the bill pays for it. Unless you’re going to set up a different agreement in your own family, that’s something to strongly consider. Do you want to take on the responsibility of paying for everybody’s cell phone? If not, then it’s better for each person to get their individual plans. It might cost more in total as a group but it could be cheaper for the person who would otherwise pay all of those bills.

If you’re a parent looking to pay for a family plan for your not-yet-adult children then things are different. You’re going to pay the bill either way, so you want to get the cheapest plan for all of the phones. In that case, a family plan could cost less. Just think carefully about who needs a phone and who will pay those bills. Could those people pay the bills independently of a family plan? Would they be willing to chip into a family plan? These questions are the first step in deciding whether or not to look at family cell phone plans at all.

What Kind of Plan Does Each Person Need?

Now let’s go back and talk about that first mentioned reason. Each person in the family might have different needs when it comes to a cell phone plan. Perhaps your elderly father only needs a limited number of minutes and text messages and doesn’t use the Internet at all. In contrast, your teenager would always go over the limit if they didn’t have an unlimited plan.

It’s important to think about this. Make a list of each person who would be on the plan. List out their specific needs for minutes, text, Internet. Include any special requirements such as international calling. When you look at family plans, review this list. If a company requires all of the phones to have the same plan, then it might be cheaper to get individual plans based on each person’s individual needs. You’ll have to do the math and weigh that for yourself.

When Is It Cheapest to Get a Family Plan?

Your own family is unique. Paying attention to the details above (who needs a phone, who will pay the bill, what each person requires in phone service) will really help determine whether its cheapest to get a family plan or individual cell phone plans. Nobody else can truly answer that question for you. However, there are some basic guidelines that can get you started if you’re not quite ready to do all of those calculations yourself.

Need Unlimited? Get a Family Plan.

Use a Lot of Other Services? Check Family Plans.

These days companies compete against one another by offering some great deals on extra services. For example, you might get a Hulu subscription free when you sign up for a family plan with one cell phone company. Another might offer free music streaming services. Take a look at all of the services that your family already pays for. If you got a new family cell phone plan that included those most-used services then would it be cheaper than paying for both the phones and the services separately?

You’re Already On a Family Plan

Perhaps you already have a family cell phone plan. You’ve wondered if switching to individual plans could be cheaper? Probably not. The family plan deals are usually designed to help you save money as a group and penalize you if you try to leave the plan. Therefore, trying to switch out once you’ve got the plan could end up costing you. Look at this carefully if you already have a family plan that you’re thinking about changing.

When Is It Cheaper to Get Individual Phone Plans?

As aforementioned, you should get individual phone plans if you would prefer for each person to pay their own phone bill. It’s a hassle to collect individual payments every month for a shared bill. If you just pay for yourself, then you don’t have to worry about anyone else’s costs. This makes sense in families where everyone on the plan is a working adult.

It may also be cheaper to get individual phone plans if you want to limit the amount of service on one or more phones. For example, if you want to make sure that your teen doesn’t exceed a specific amount of minutes then you could get them their own very limited phone line. In fact, you might get a prepaid phone for that child. There are also ways to restrict usage on individual phones on family plans, so this isn’t clear cut, but it’s something to consider as you weigh your family’s phone options.

Finally, make sure that you look at your existing contracts and deals. If you’re locked into an individual plan right now then it could be more expensive to switch that phone to a family plan. Wait until your contract runs out then reassess. Likewise, if one or more of your phones is bundled with other services, then review what changing to a new plan would do to those total costs. In other words, pay attention to each detail of each phone so that you can make the cheapest choice possible for your family.

Summary: Family Plans Are Usually Cheaper But Not Always

Generally speaking, family cell phone plans are cheaper. If you can get a family plan then have each member pay their own portion of the plan, then that’s the best route. But each plan and each family is complicated. Look at your exact needs. Check the options in your area. Compare plans carefully. Take the time to find the exact plan right for you.