"I am a great believer in luck, and I find the harder I work, the more I have of it." - Thomas Jefferson

The economic fallout caused by the COVID-19 pandemic has had a mixed impact on the commodities market, as safe-haven assets such as gold and other precious metals have rallied as investors seek to protect their portfolios from increased market volatility, while other commodities have slid amid increased uncertainty.

The fact that there are still many unanswered questions about how the global economy will look like after the pandemic is left behind continues to take a toll on the stability of the financial markets and investors are struggling to find direction.

However, by analyzing the evolution of the price of certain commodities, it is easier to get a read of what the market as a whole is expecting, which could help investors in preparing for what may come next.

The price of gold and silver has been surging since the pandemic broke out and the global economy was swept into lockdowns and travel restrictions, which ended up putting significant downward pressure on stocks and other riskier assets while favoring safe havens such as precious metals and other hard assets.

So far this year, the price of gold has increased by 25% while the spot price of silver has jumped by a similar percentage, way ahead of the returns seen by broad-market indexes such as the S&P 500 and even the tech-heavy Nasdaq 100 during the same period. 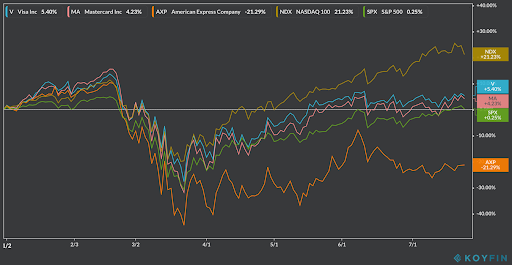 This surge has also been fueled by the massive liquidity injections coming from central banks in an effort to contain the financial turmoil caused by the virus and this is possibly the most supportive element that is pushing – and may continue to push – gold prices to higher levels.

Oil has recovered but still has a long way to go

Meanwhile, energy commodities such as oil and natural gas are still far from their pre-pandemic prices, with the West Texas Intermediate (WTI) losing 32.5% for the year, trading at roughly $41 per barrel, while the Brent is also down 35%, trading at $43 per barrel. 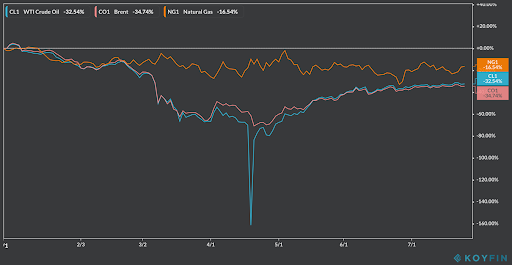 Oil prices took an unprecedented blow in mid-April as a result of a shortage in storage capacity, as the pandemic emerged right in the middle of an oil price war between Russia and Saudi Arabia that resulted in higher output levels while demand declined steadily as a result of business shutdowns and a halted global trade activity.

However, industry associations like OPEC and even non-OPEC countries decided to make voluntary production cuts after the price of oil ended settling on negative territory and this has provided stability to the value of the commodity, even though significant uncertainties remain in the picture.

At this point, the pace of the recovery in the demand for oil continues to be the biggest concern, as the pandemic is expected to take a toll on industrial activity and the airline industry – a major consumer of oil.

How to read this mixed performance?

The recent surge in precious metal prices should be seen as a strong indication that investors feel less optimistic about the stability of certain financial assets in the near future, as gloomy economic forecasts anticipate that businesses will earn less money for the foreseeable future.

Meanwhile, interest rates in many developed countries are near zero or even negative after accounting for the impact of inflation, which increases the appeal of hard assets such as gold as a hedge against declining currency values.

On the other hand, the price of oil is possibly providing a good hint of how the world is weighing the prospects of an economic recovery, as even though many economists are forecasting a swift rebound towards pre-pandemic levels, the price of oil seems to be more conservative on that approach, possibly expecting a more conservative scenario where economies reopen and recover at a slower pace.

By identifying and understanding these signals investors can take appropriate measures as to how they allocate their assets, possibly avoiding a high concentration in risky assets and favoring more conservative investments that, even though may provide lower returns, could also serve as a hedge if the financial markets go through another turmoil similar to the one seen in late February.