"I'm living so far beyond my income that we may almost be said to be living apart." - E.E. Cummings 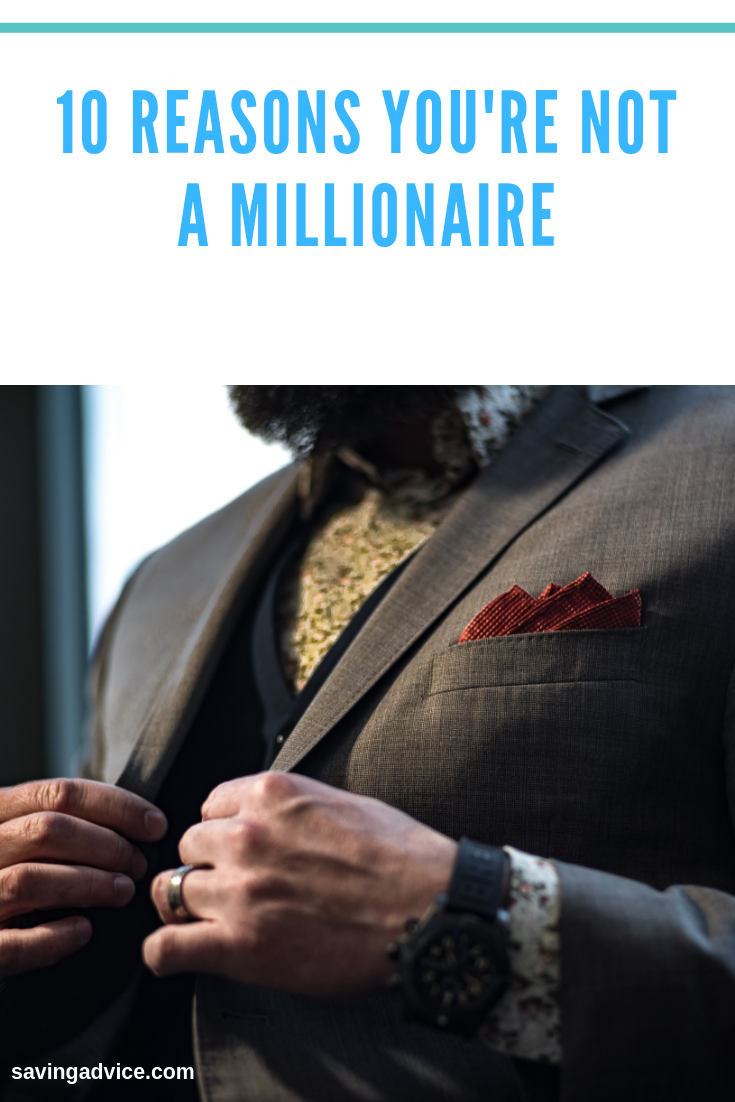 There seems to be an impression that the only reason that people aren’t able to become millionaires is that they don’t work hard enough. The truth is that hard work has very little to do with becoming a millionaire. That’s not to say that you don’t have to work hard. You do. But you also need to avoid the many pitfalls and bad financial decisions which end up being the real cause that most people aren’t able to build wealth. The truth is that you don’t have to have a huge salary to gain assets in excess of a million dollars, but you do have to make good financial decisions (and avoid making bad ones).

It’s important to note that a single issue is likely not what’s keeping you from millionaire status, but a combination of several of the actions and decisions you’ve made. And, yes, there are exceptions to the rules, but then there are also people who win the lottery — and would you really bet your retirement on winning the lottery? Here are 10 reasons that could very well be a contributing cause of why you’re not currently a millionaire:

You Spend More Than You Make

There are no secrets, and there certainly is nothing magical, when it comes to the basics of personal finance. In order to keep your finances in order, you need to spend less than you earn. If you fail to do this one simple thing, it doesn’t matter how much money you make, you’ll always find that you don’t have enough money to make ends meet. It also goes a step further than this. Spending less than you earn is not enough in itself to build wealth. You have to also actively save and invest a portion of all the money that you make. Most people recommend this amount to be 20% of your income. If you aren’t putting aside 20% of every paycheck you receive and placing it into long-term savings and investments, chances are you aren’t going to become a millionaire.

You Try To Meet Other’s Expectations

There is nothing which will keep you from reaching your financial goals faster than trying to live up to other people’s expectations instead of your own. This is more commonly known as trying to “keep up with the Joneses.” The simple fact is that if you’re trying to live like a millionaire before you have the resources of an actual millionaire, it’s not likely that you’re ever going to become a millionaire. Instead, you will simply be building up a lot of debt and wasting money on things to impress people who probably won’t be impressed anyway. Trying to keep up with the Joneses when your salary can’t compete with the Joneses is a sure way to sabotage the chance of building wealth.

You Don’t Pay Yourself First

One of the most fundamental steps that you can take to ensure that you put away money for yourself is to pay yourself before you pay anybody else. If your goal is to save 20% of your income, you need to pay yourself that 20% from your paycheck before you pay any other bills or expenses that you may have. If you try to pay yourself after you pay all your other expenses, you’ll inevitably fall short at the end of the month from time to time (if not always), and fail to save as much as you had hoped. By paying yourself first, you make the commitment that wealth creation is an important part of your overall plan, and not something that hopefully gets accomplished after everything else.

This probably isn’t going to be the most popular item on the list of why you’re not a millionaire, but the hard, cold truth is that children are expensive. Very expensive. The costs associated with kids can be mitigated to some degree if you have already built some wealth and have planned the cost of having children into your budget, but that often isn’t the case for many couples. Having children when you are young with a limited income will greatly affect your ability to build wealth. With compound interest being so important to wealth creation, and a cornerstone of it being that the sooner you begin saving and investing, the better, the fact is that it’s nearly impossible to put money aside when you’re young with children. When this is the case, all the extra money you have inevitably ends up going toward the children’s care instead of being invested for wealth creation.

Your House Is Too Big

Some people assume that purchasing a big house is a good investment. While this can be the case, purchasing more house than you can afford is a good way to make sure that you’re unable to create real wealth. The problem is that when you buy big, your expenses for the house are also bigger. A large house will mean bigger tax payments, more expensive upkeep, more stuff purchased to fill the house, higher insurance payments and all around more expenses than if you purchased a house that actually fits your needs. The real way to build wealth is to purchase a house that fits your needs and budget, and take all the savings that you gain from not buying the large house to invest and create wealth.

You Replace Things Too Soon

Just because there is a newer and shinier version of the gadget that you purchased a year or two ago doesn’t mean that you need to buy that new gadget. If you’re the type of person who is constantly replacing products that still have a useful life in order to buy the supposedly latest and greatest gadgets, chances are that you’ll have a difficult time building the type of wealth that you want. Those who create savings to invest do so by getting great value out of what they buy by using their purchases for the entirety of the items’ useful life. People who are able to afford the newest and shiniest things by upgrading every year are those who have already built their wealth, not those that are currently trying to.

You Let Others Take Charge Of Your Finances

There is nothing wrong with getting the opinions of others to help you lay out a plan to build your wealth, but it’s important to be an active participant in this planning. Giving full control to somebody else to handle your money is a sure way to make sure that you fail to build the wealth that you hope to create. Creating wealth and keeping it means that it’s necessary for you to understand the financial decisions which are being made, and periodically reevaluating them to make sure that they are meeting the goals that you have set. Giving full control of your finances to somebody else creates a situation where you’re no longer in control of your financial future, and the only one who you can truly trust to be looking out for your best financial interests is yourself.

You Fail To Take Care Of Your Health

There is nothing which will drain your wealth more quickly than getting sick. While you may not be able to control all aspects of your health, there are certain steps that you can take to make sure that you’re as healthy as you can possibly be. Eating right, getting exercise, taking preventative measures, getting annual check-ups and taking care of medical problems before they become truly serious all put you in a position to live a healthier life. The better you take care of her health, the better the chance that you will be able to create wealth, and keep that wealth as you age.

You Get A Divorce

Just as getting married can be a wonderful way to help build wealth, getting a divorce usually has the exact opposite effect. In fact, getting a divorce is one of the best ways to destroy the wealth that you have built up to that point. That’s not to say that you should stay in marriage solely for financial reasons, but it’s important to know that divorce is usually a giant wealth destroyer, and getting a divorce will hamper the best-laid plans to become a millionaire.

You Have One Or More Bad Habits

A bad habit is anything that takes money away from you without giving more in return. The classics are smoking, gambling and drinking alcohol, but a bad habit could just as easily be that daily expensive cup of coffee or the three sodas that you drink each day. It doesn’t even have to be buying things. Being lazy and sitting in front of the TV five hours a day instead of working on making yourself better is also a bad habit that hurts wealth creation. Depending on the number of bad habits you have, and how much they cost you on an ongoing basis, these alone could be keeping you from becoming a millionaire.