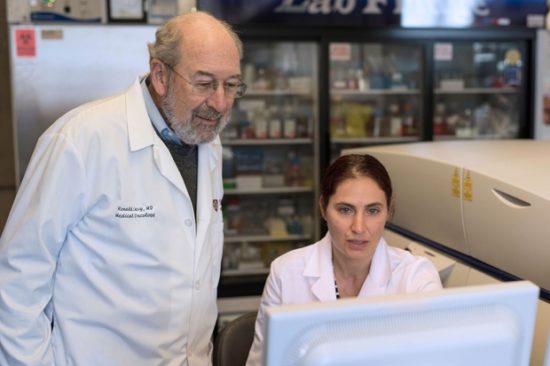 File this under: research that might one day reduce cancer costs.

The researchers, Ronald Levy and Idit Sagiv-Barfi, at Stanford University School of Medicine have added a significant advancement in Medical Science by the discovery of a cancer vaccine that eliminates tumors in mice.

During the study researchers injected minute amounts of two immune-stimulating agents directly into solid tumors in mice, this eliminated all traces of cancer in the animals, including distant untreated metastases.

The study found that this approach may work for many different types of cancer, including the ones that arise spontaneously. According the American Cancer Society, more than 4,500 people are diagnosed with cancer in the U.S every day, with increased risk as a person grows older.

Most older people have Medicare, and Medicare does cover cancer treatment. If you have a comprehensive Medicare supplement and a Part D prescription drug plan, most of your treatment will be covered at 100 percent.

For many others, cancer treatment can be a costly expense, putting them into debt.

Researchers believe that this local application could serve as a fast and affordable cancer therapy that is unlikely to cause the adverse side effects often seen with body-wide immune stimulation.

The new vaccine has cured 97 percent of cancerous tumors in mice and has now been approved for human trials. If successful, this could mean a revolutionary breakthrough for many types of cancer.

The trial is called the Stanford Non-Hodgkin Lymphoma Vaccine Study and is only for patients with low-grade B-cell non-Hodgkin lymphomas. This is not like traditional vaccines, it does not create continual immunity. The trial’s vaccine-like injection carries two immune-stimulating drugs.

These injections activate the immune system’s T cells (cells important for battling tumors) to eliminate tumors throughout the body and stop cancer cells from growing.

This is a short stretch of DNA called a CpG oligonucleotide, this works with other nearby immune cells to amplify the expression of an activating receptor called OX40 on the surface of the T cells.

This is an antibody that binds to OX40, this activates the T cells to lead the charge against cancer cells. The two agents are injected directly into the tumor, only T cells that have infiltrated it are activated. This means these T cells are “prescreened” by the body to recognize only cancer-specific proteins.

Cancer often exists in a strange sort of limbo regarding the immune system. T cells recognize the abnormal proteins often present on cancer cells and infiltrate to attack the tumor. Typically, as a tumor grows it devises ways to suppress the activity of the T cells.

Levy’s method works to reactivate the cancer-specific T cells by injecting minute amounts of the two agents directly into the tumor site.

Researchers were happy to see the approach work so well for the laboratory mice with transplanted mouse lymphoma tumors in two sites on their bodies. Injecting once tumor site with the two agents caused the regression of the treated tumor and of the second, untreated tumor.

About 87 of 90 mice were cured of the cancer. The cancer recurred in three of the mice and the tumors regressed after a second treatment.  Researchers saw similar results in mice with breast, colon and melanoma tumors.

Researchers found that mice genetically engineered to develop breast cancer spontaneously in all their 10 mammary pads also responded to the treatment. If the first tumor was treated it prevented the occurrence of future tumors and significantly increased the animals’ life span.

However, Sagiv-Barfi explained that this is a very targeted approach. When transplanting two types of tumors into the mice; lymphoma cancer cells in two locations and a colon cancer cell line in a third location, treatment of one of the lymphoma sites caused the regression of both lymphoma tumors but did not affect the growth of the colon cancer cells.

The new treatment is technically not a vaccine. The treatment does involve a vaccine-like injection that prevents cancer from coming back and destroys cancer cells in the body. According to the American Society of Clinical Oncology this can be referred to as a “cancer vaccine”.

One agent is already approved for use in humans and the other has been tested for human use in several unrelated clinical trials. The clinical trial was launched in January to test the effectiveness of the treatment in patients with lymphoma.

Patients will still receive radiation therapy during the study in conjunction with the vaccine.

The human trial will be at Stanford University School of Medicine and will include about 35 participants. This is a research in immunotherapy, a type of treatment that uses one’s own immune system to fight cancer.

Ronald Levy is a pioneer in the field of cancer immunotherapy, research in his laboratory lead to the development of rituximab which is one of the first monoclonal antibodies approved for use as an anti-cancer treatment in humans.

The Future of the Cancer Vaccine

Ronald Levy believes this treatment could be useful for many tumor types and he can see a future where clinicians can inject the two agents into solid tumors in humans prior to surgical removal of the cancer to prevent recurrence due to unidentified metastases or any lingering cancer cells.

Levy hopes that by injecting the two agents, clinicians will be able to head off the development of future tumors that arise due to genetic mutations like BRCA1 and 2. Levy also believes that there is no limit to the type of tumor we could potentially treat, if it has been infiltrated by the immune system.

With a treatment like this, cancer could be a lessened burden on patients and health care providers. Insurance companies and patients alike would be pleased to have an affordable treatment option.

More about the Stanford Researchers

This study is an example of Stanford Medicine’s focus on precision health, the goal of which is to anticipate and prevent disease in healthy people and precisely diagnose and treat disease in the ill people.

Gambhir is the founder and equity holder in CellSight Inc., the company develops and translates multimodality strategies to image cell trafficking and transplantation.

This research was happily supported by the National Institutes of Health (grant CA188005), the Leukemia and Lymphoma Society, the Boaz and Varda Dotan Foundation and the Phil N. Allen Foundation.

The study was also supported by Stanford’s Department of Medicine.