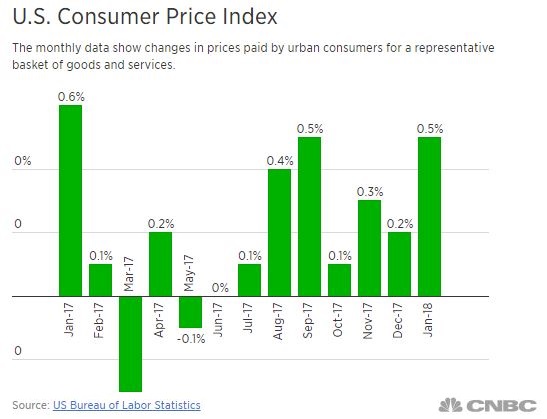 This week, the market headed south just on expectations of interest rate language in the Fed’s meeting minutes from January — and then there turned out not to be anything specific about it in the release.

The market also had a down day last week following the release of the consumer price index, which indicated surging inflation both the month of January and the year. it jumped 0.5% last month, surpassing economists’ forecasts for a 0.3% increase.

This news followed a report earlier in the month of another inflation indicator: the largest wage gain in over eight years.

While that is good news for consumers, the markets get skittish, fearing the Fed will raise interest rates.

The fear is there all right: Some estimates say there could be three interest rate hikes by the end of the year, and that expectation is being priced into stock and bond transactions.

So far, the downward trading in response to the inflation news has been short lived: Investors have taken advantage of opportunities to buy stocks at lower prices following the dips.

This appears to be the beginning of a pattern in volatility that some analysts say might continue until the end of the year — or at least until the uncertainty is resolved.

In this case, the uncertainty surrounds what the Fed will do in response to the heightened inflation. When will the next interest rate increase occur, and will the economy cool off as a result?

Readers, what concerns do you have about inflation? How are you seeing it play out in your daily finances? When do you think the next interest rate hike should happen?