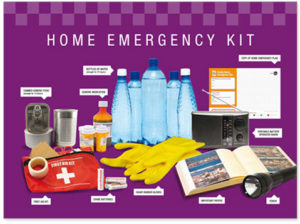 Preparing for emergencies makes good financial sense, but not if you’re doing it impulsively based on hysteria marketing.

That type of advertising appears to be reaching new heights among (re-) sellers of emergency preparedness supplies, most of whom appear to be passing on the costs of their excessive marketing campaigns to consumers.

The U.S. spent a record $306 billion on repairing disaster related damages last year, but that’s no reason for you to overspend on preparations.

Repairing damages almost always costs more than preparing for them ahead of time, but there’s also such a thing as the wrong preparation for emergencies.

Premade kits for emergency preparedness serve as a form of instant gratification that might not give you adequate preparation. This mismatch can make it harder to justify paying for what turns out to be an excessively marked up product.

Some of the most extreme markup surrounds emergency water supplies, both sold on its own and as part of kits.

The marketing lingo justifies these provisions as having a longer shelf life than other types of packaging, but realize that said varieties already last at least five years but possibly forever if properly sealed.

No matter what size lot of emergency water you buy it’s a ripoff. Only one retailer lets you buy one at a time, which is ironic because that might be the only convenient version of the product — at 4.25 ounces, it’s lightweight enough to put in an evacuation bag and not feel weighed down.

Of course, it’s nowhere near the amount of water you need for an emergency — you’re supposed to plan on having three days worth of provisions because that’s the average amount of time you might be stranded without water.

To get by for three days, plan on three gallons of water for both bathing Now that amount of water packed in the above mentioned emergency format costs $18 to $78 across retailers.

Buy purified water in gallon jugs and it’s about $1 apiece. Get it in smaller plastic bottles for drinking and you can find a nice balance between portable and affordable.

Even if you have to replace the water every five years instead of never, this still works out to be cheaper than what any of the emergency kit marketers are selling — because you’re not paying for the hysteria factor.

Some of the markup is hidden in kits with a bunch of products in them; at first it might look like you’re saving money but that’s compared to individual product prices that are already too high.

Not One-Size Fits All

Furthermore, these kits have a one-size-fits-all approach that might not address the specifics of different types of emergencies that are unique to where you live.

Even when they are marketed as specific to hurricanes, fires, or blackouts, a lot of the offerings take an emergency kit that’s geared toward campers, relabel it and customize only a few things.

Thus you have kits that purport to be preparation for earthquakes yet that lack items that make your home safer during a shaker: straps to bolt down furniture so it doesn’t topple, adhesives to keep breakables from falling over and shattering, anchors to keep pictures from falling off the walls, window film that keeps shattered glass from blowing in, a rod or wrench to turn off the gas line, fire extinguishers, and even helmet and goggles to protect you from larger falling objects.

Although it will take more time to prepare your own emergency kit, investing the extra time is worthwhile if the outcome keeps you more secure when a disaster does happen.

Here are some other great articles on this topic:

Readers, what kind of emergencies are you worried about happening near you?