Be thankful that Thanksgiving turkey prices are a bit lower this year compared to last.

The price per pound has dropped two cents over the past year to reach $1.40, according to national averages tabulated by the U.S. Farm Bureau, Department of Agriculture and the Bureau of Labor Statistics.

A 16-pound turkey costs an average of $22.44 this year. Bear in mind that food price inflation varies widely by geography, partly due to transportation costs and differences in the standard of living. 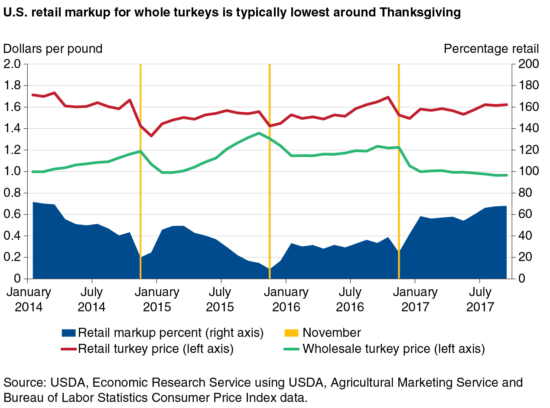 Most supermarket chains quote prices on a store-by-store basis rather than nationally, due to regional differences in the average cost of living.

Meanwhile, the USDA recommends that dinner hosts plan their turkey purchases with the assumption of one pound of poultry per guest.

Based on that figure, Thanksgiving might be one of maybe a dozen and a half occasions a year that the average American eats turkey.

During 2016, the average person ate 16.7 pounds of turkey, according to the National Turkey Federation. This is a little more than double the per capita consumption in 1970.

Yet demand for turkey this year is lower than what people in the business saw last year, and apparently that is the basis for the drop in prices.

This also explains why prices can vary by the type of retailer — and even different locations owned by the same supermarket chain.

Whatever the price, about 88% of Americas plan to eat turkey on Thanksgiving, and the industry expects about 46 million of the birds to be served on the big day. That’s a little more than double the number served on Christmas.

Readers, are you feeling thankful for lower turkey prices this year? Where are you planning to gobble turkey — and what about Black Friday?

Speaking of which, there’s plenty more articles about Thanksgiving to gobble  from our archives: