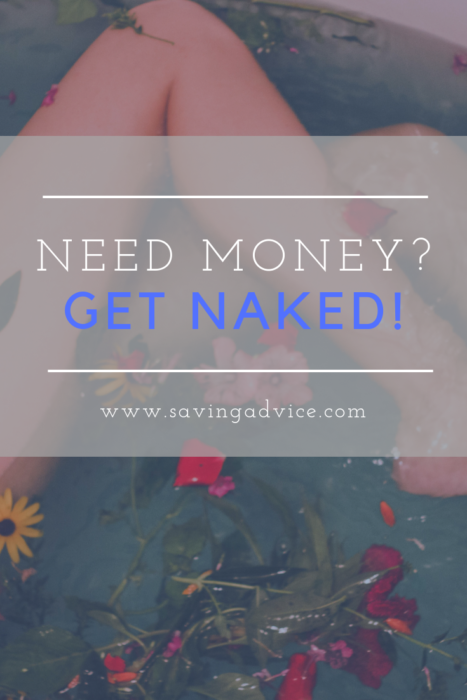 A friend of mine recently told me her money secret. She has a modest job, yet always has the latest gadgets: flat screen TVs, home theater system, the works. She also recently had new carpet put in her basement and bought an air-hockey table for her rec room.

I finally asked her how on earth she was paying for all of this. At first, I thought I was going to get the standard answer, that it was all part of an ever-growing credit card balance. I wasn’t even close, and I was even more floored by the real answer.

When she needs extra money, to either pay off debt, fix her house, or buy the things she wants, she sells photos online. But, not just any photos — nude pics of herself. If she’s feeling extra frisky, she sells her underwear, too. She’s been doing it for five years, unbeknownst to her friends and her employer. Her haul?

The barriers to entry are so low — almost anyone can do it. All you need is a cheap digital camera and some basic photo editing software, and you’re in business.

My friend stumbled on this several years ago after she was laid off from a relatively high-paying job. Unemployment checks weren’t covering the bills, it was taking longer than she expected to find a job that paid enough, and she needed a way to make ends meet.

How to Get Started

She had long been selling random items on eBay. When she sold a pair of her old high-heeled shoes there, the buyer told her about an adults-only auction site where she could sell her girlie castoffs, like shoes, dresses, etc., as well as naughty photos and videos for a lot more than she was bringing in on eBay.

She tried it out and the money was so good, she became one of the thousands of ordinary people hosting adult auctions online and turning a tidy profit. She just posts a few Playboy centerfold-like photos two or three times a week, she says, and the money rolls in.

“It was an easy way to make money at home in my pajamas,” she said. “And it turns out, I made a lot of friends online.” She enjoyed it so much that when she got a new job, she didn’t quit.

She insists that what she does isn’t shady. There is no prostitution and she isn’t sitting at home producing amateur hard-core pornographic movies. The only contact she has with her customers is online, either through the auction site or a separate email account she has just for running her side business.

After a little research, I discovered that auctions are only one of many ways folks are making money online in their birthday suits. Some sites pay up front for nude photos and then post them in their members-only areas. One site I stumbled across pays (ahem) extremely well-endowed women a minimum of $200 for topless photos. Another very popular site features artsy nude photos of young hipster women with tattoos and pays at least $200 a session. That kind of money isn’t to be taken lightly, especially if you are in a pinch and aren’t shy about baring it all for strangers.

Obviously, earning money this way isn’t for everyone. But I will say you don’t have to be a supermodel to do it. My friend is pretty, but not gorgeous, average build — but dare I say, a little bit pudgy — in her late 30s, and she is doing quite well.

Is Making Money on Adult Sites For You?

If nudity or getting paid to date doesn’t conflict with your beliefs or your relationships, making money on internet adult sites could be a significant money maker that can pay as much or better than a part-time job. (And, without the unpleasant bosses and scheduling conflicts that can come with moonlighting.)  However, you should have options, some of these involve nudity, some don’t.